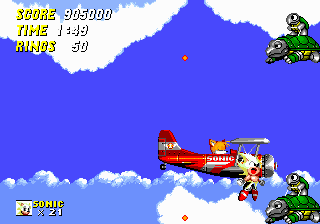 Watch on YouTube Watch Camhack
Author notes Discuss
7.68 / 10
Published on 5/20/2022
Sonic the Hedgehog 2 (1992) was the game that introduced the Super Dash Attack. The ability, referred to as Spin Dash in later games, has become one of the most beloved features of the series and, indeed, one of the most prominent features of the speedrunning scene as a whole.
In this exhilarating movie, the authors speed their way through this classic's bonus stages to collect all 7 chaos emeralds, as well as the varied acts making good use of Spin Dashes to finish them in record time. The authors also control Tails — Sonic's two-tailed foxy buddy — to allow for even faster routes and making shorter work of bosses.
We have a run where Knuckles replaces the main characters and finishes the game in record time, and another run where he goes for the max rings challenge.
We also have movies in Sonic the Hedgehog, Sonic the Hedgehog CD and Sonic 3 & Knuckles.
Every second link leads to a CamHack encode that keeps Sonic visible all the time.
See full publication history
Game:
Sonic the Hedgehog 2
Genres:
Platformer

Emulator Replay:
Gens 11b
Download (.gmv)
Webmasters, please don't link directly to the files. Link to this page or the front page instead.
Republication of movies from this site is only allowed under the following conditions:
Do not label them with speculations. If unsure, ask the site staff for details.