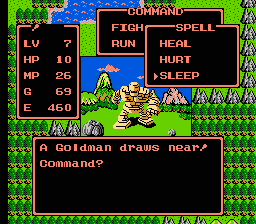 Watch Download (.fcm)
Author notes Discuss
6.63 / 10 Votes: 32.5
This is the fifth published movie of Dragon Warrior, a seemingly complex, but ultimately, fairly simple NES RPG. The character completes his quest at Level 7. There are several things about this movie that might seem odd if one is not aware of them beforehand:
Note: The first AVI release of this movie had wrong author name in it. The AVI was replaced a couple of hours later. Download statistics of 91 downloads was lost.
Published on 2/8/2006
Obsoletes:
NES Dragon Warrior by Genisto in 18:43.00