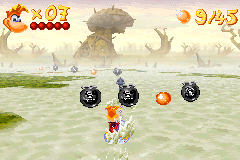 Watch on YouTube
Author notes Discuss
6.5 / 10
Rayman 3 is the third game of the Rayman series. It was originally developed to be the GBA version of Rayman 2, which is why the plot mostly centers around Rayman 2's plot. Globox swallows a Dark Lum, so Rayman goes out to find a cure. However, Admiral Razorbeard attempts to get the Dark Lum out of Globox to make himself more powerful. Rayman must get a cure for Globox while also stopping Admiral Razorbeard's plans.
In this run, NinjaCocktail does a full completion of the game by collecting all of the Lums and unlocking all of the cages as fast as possible.
Published 14 days ago
See full publication history
Game:
Rayman 3
Genres:
Action
Platformer