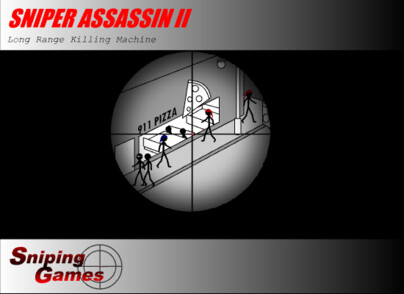 Watch on YouTube Watch No Scope View
Author notes Discuss
2.88 / 10
Published on 11/16/2022
Sniper Assassin 2 is part of the Sniper Assassin series, another set of entries in Flash sniper assassin subgenre. Unlike most others in said subgenre, it has an ongoing story. Your wife has been murdered by unknown forces, and you must use your particular set of skills to find who's responsible and eliminate them. Along the way, you torture some of your leads to get information that will get you closer to your wife's murderers.
Spikestuff kills and tortures their way through this game in record time.
There is also an encode that removes the scope view and leaves just the reticle using a modified SWF file.
See full publication history
Game:
Sniper Assassin 2
Genres:
Action
Shooter

Emulator Replay:
libTAS v1.4.4 // ruffle-nightly-2022-10-10
Download (.ltm)
Webmasters, please don't link directly to the files. Link to this page or the front page instead.
Republication of movies from this site is only allowed under the following conditions:
Do not label them with speculations. If unsure, ask the site staff for details.