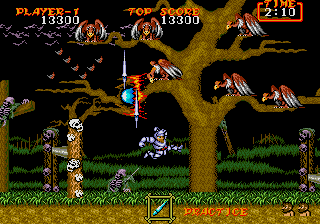 Watch
Ghouls 'n Ghosts is a sequel to Ghosts 'n Goblins on the NES. On a quest to recapture stolen souls from Lucifer (Loki in this game), the player advances through a series of levels filled with demonic and undead creatures.
Usually, one would have to finish the game twice in order for it to end properly. Instead of doing so, the author of this movie uses a password to start off on the 2nd playthrough. Despite the game displaying "Practice" on the screen, this movie is indeed played on hardest difficulty. See the author's comments for a more thorough explanation.
This movie has an Atlas Map encode of Level 1-1, which shows the standard encode overlaid on a zoomed out map.
The baseline tab shows the default movie beating the game as fast as possible without any special conditions.