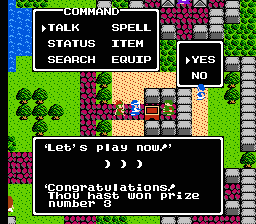 Watch Download (.fcm)
Author notes Discuss
5.85 / 10 Votes: 22
Selected comments from the author:
The second Dragon Warrior game beaten as fast as possible.
Dragon Warrior is an epic RPG series which now spans 8 games across many systems. The second game greatly expands on the first to include a party of three heroes (all descendents of Erdrick and the hero of DW1) and battles that may include many enemies.
The world is much bigger and there are many big dungeons to explore as well. Luckily there are new abilities and items to make this easier. Enemies can randomly drop items when defeated and there is a lottery which is the precursor to the casinos which appear in each later DW game. Finally, you might notice that many of the enemies in this game appear in later games, particularly DW8.»»
Published on 4/30/2006 12:00 AM
See full publication history
Game:
Dragon Warrior II
Genres:
RPG