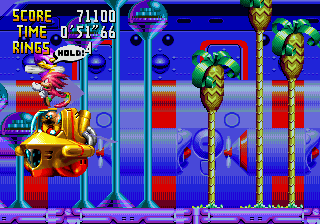 Watch on YouTube
Author notes Discuss
6.26 / 10
Published on 6/2/2006
Knuckles' Chaotix is a Sonic game that doesn't feature Sonic. The story follows Knuckles the Echidna as he tries to save his friends from Dr. Robotnik, one at a time, by tying an elastic band of "ring energy" between himself and each of them.
The gameplay is similar to that of earlier Sonic games, and after each stage, the next level is selected via roulette. These roulettes and the game's cutscenes comprise about 66% of the total movie length, so we recommend skipping through them.
In the site's first 32X publication, Upthorn uses a number of glitches (of which the most prominent is zipping through walls) to complete most of the levels tens of seconds faster than intended.
See full publication history
Game:
Knuckles' Chaotix
Genres:
Platformer

Emulator Replay:
Gens 9f NitsujaMod
Download (.gmv)
Webmasters, please don't link directly to the files. Link to this page or the front page instead.
Republication of movies from this site is only allowed under the following conditions:
Do not label them with speculations. If unsure, ask the site staff for details.