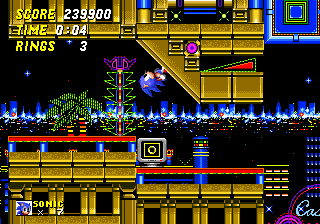 Published on 5/13/2012
Sonic the Hedgehog 2 (1992) was the game that introduced the Super Dash Attack. The ability, referred to as Spin Dash in later games, has become one of the most beloved features of the series and, indeed, one of the most prominent features of the speedrunning scene as a whole.
In this exhilarating movie, Aglar speeds his way through this classic's varied acts making good use of Spin Dashes to finish them in record time. The author also controls Tails—Sonic's two-tailed foxy buddy—to allow for even faster routes and making shorter work of bosses.
This is an improvement of 00:50.77 seconds over the previous movie, thanks to better routes and general optimization as explained in the author's comments.
This movie has an Atlas Map encode of Mystic Cave zone 1, which shows the standard encode overlaid on a zoomed out map.
Obsoletes:
Genesis Sonic the Hedgehog 2 by FuzZerd, Sonikkustar, upthorn, Aglar in 18:42.37

Emulator Replay:
Gens 11a
Download (.gmv)
Webmasters, please don't link directly to the files. Link to this page or the front page instead.
Republication of movies from this site is only allowed under the following conditions:
Do not label them with speculations. If unsure, ask the site staff for details.