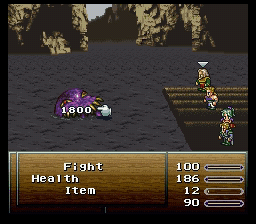 Watch Download (.smv)
Author notes Discuss
6.49 / 10 Votes: 42
Final Fantasy VI (renamed to Final Fantasy III in North-American publication) is arguably the most famous RPG on the SNES console.
This movie plays through the game in little over 4 hours by the means of advanced analysis of the game engine, and the abuse of certain game errors/features that give the ability to one-hit-knock-out even the strongest enemies ― most prominently (but not only) the Joker Doom lore from Setzer’s slot machine.
A glitch involving Relm’s sketch ability was not used in this run. That glitch cannot be performed on this version of the ROM. There is another run using this glitch on the 1.0 version of the ROM.
The boss battles, including the last boss, might be somewhat anticlimactic in this movie due to the unusual attack technique, but besides being a very nice timeattack/TAS record, the movie is a nice trip down the memory lane for those who have played this game, and a graphically and especially musically pleasing experience for even those who haven't. This movie was made with the English-language version.
We recommend reading the author’s comments regarding this movie.
Published on 6/11/2006 12:00 AM
See full publication history
Game:
Final Fantasy VI
Genres:
RPG

Emulator Version:
Snes9x 1.43 improvement9
Webmasters, please don't link directly to the files. Link to this page or the front page instead.
Republication of movies from this site is only allowed under the following conditions:
Do not label them with speculations. If unsure, ask the site staff for details.