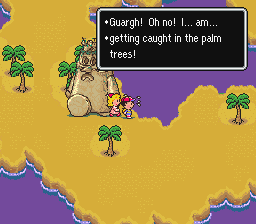 Watch Download (.smv)
Author notes Discuss
7.3 / 10 Votes: 35
Earthbound is a great RPG, designed by Shigesato Itoi in 1994-1995, and is also known by the name Mother 2.
It is best described as "random", in a good way. The game has a great emphasis on a humor, and indeed many things in the game are almost caricatured, from subplots to characters. It also has a versatile soundtrack.
Although this being a speedrun (tool-assisted at that), most of the plot of the game is intact, making this movie very entertaining to watch even as a TAS.
Details about each scene and decision in this movie can be read in the authors' comments.
This movie does not use a death as a shortcut. Although that was a conscious decision by the authors, what it actually means was bent to the extreme.
NapstrPSX made an audio commentary for this TAS.
Published on 7/23/2006 12:00 AM
See full publication history
Game:
EarthBound
Genres:
RPG