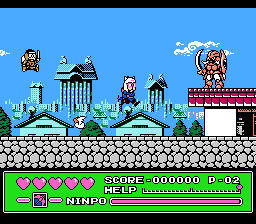 Watch on YouTube
Author notes Discuss
6.28 / 10
A game based on the show Samurai Pizza Cats. Five characters are available, but one (Batcat) is used extensively because his ability of flight leads to many shortcuts.
This game has a glitch enabling one-frame boss fights. To quote the author: If the team leader executes a level three ninpo attack on the first frame of combat, the boss is dead. Right there, dead, even the ones that don't show up immediately. As pulling this off requires your weapon to be maxed out, this saves anywhere from a great deal of time (first level) to a little bit (last level).
This movie was recorded with a bad ROM dump (b1); see the author's submission notes for more information regarding this.
Published on 9/2/2006 12:00 AM
See full publication history
Game:
Kyatto Ninden Teyandee
Genres:
Action
Platformer