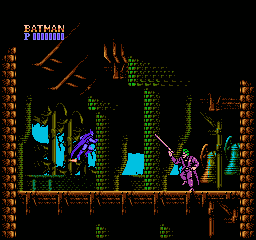 Watch on YouTube
Author notes Discuss
6.8 / 10
The hero of Gotham City goes against the villain of Gotham City.
His fists are more powerful than any weapon in the world, but he rarely kills anyone. It's not like his enemies can hurt him anyway. After all, he's the hero, and heroes are supposed to be invincible.
This movie is very good - Linnom clearly is very good at this game.
This is 152 seconds faster than his previously released version and 72 seconds faster than Bisqwit's version which was mentioned here earlier.
The soundtrack and graphics of this game are also quite good.
Published on 4/13/2004 12:00 AM
Obsoletes:
NES Batman by Bisqwit in 11:29.40