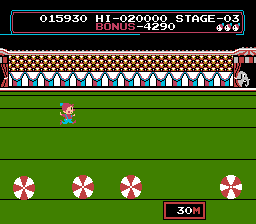 Watch Download (.fmv)
Author notes Discuss
0 / 10 Votes: 0
This is a historic movie, submitted and obsoleted before the creation of the database-based (and wiki-based) site engine, before July 2004.
It was inserted to the database in a history revival project by Bisqwit in autumn 2006.
Selected comments from the author:
This time it´s the very old game Circus Charlie. I made it mostly because I played this game as a child and it is a great memory for me ;) Hmm, the gameplay is comparably to Kung Fu, Balloon Fight or Popeye. Very old and easy and it goes on forever. However it just loops after stage 5 so I stopped my fmv there.

Hmm, I don´t know if you have played this game but as I said it´s very simple. Basically you can just jump and move forward and try to get the timing right. It´s harder than it looks ;P You are a horrible little clown avoiding stuffs in a circus.

It´s also played on "easy" and if you want there are some pics at it here:

And finally, if you even bother on reviewing it and decides it wouldn´t be a "time attack game" im not gonna be dissapointed. I mostly did it cus it´s fun for me. Maybe some others shares my opinion but I think this is more rare than Trojan. Anyways I thought it could be worth a try. It´s still a NES game and it´s completed as fast as possible. Do whatever you want with this one.
Published on 5/21/2004 12:00 AM
See full publication history
Game:
Circus Charlie
Genres:
Platformer