Comix Zone (コミックスゾーン) originally released as a Sega Genesis exclusive in 1995. This game does not require any special presentation, it is one of the late, great games of the 16-bit era, one of the best games for the Sega Genesis ever.
Interesting fact: main idea of this game was inspired by live-action pencil-sketch sequence Take On Me.

The Allies
The Villains

Knife - usefull to pull switches from far away; Dynamite - usefull to destroy objects or kill enemies. Grenade - to kill bosses fast. Ice Tea - to refill 50% health. Powe Fist - to cancel long dialogues sequences. Roadkill - not really item, but he can occupies one of slots for items. ? - any item for you choice.

This game is one large continuous trick.

[1] This is superhuman playing session, it mean having fun in progress. So movie includes many small speed/entertainment tradeoffs (less than 1 second in total), about 56 frames if be exact. Panels with tradeoffs decisions are marked asterisk (*). Here full list if anyone is interested: Added two non-necessary attacks to Strigil before throw them off the screen in pages 1-1 and 3-2 (the faster way is simply force them jump down without violence) = 5 x 2. At page 1-2 executed cool solution with killing Gravis by dynamite at bottom area it is my favorite tradeoff (primitive upper way solution is faster) = 10. During fight against mutants at end of 1-2, if make this fight boring with minimal of motions their loading can be slightly accelerated = 5. At page 2-2 ignored one unnatural usage of paper plane to favor of more logical and pleasant for view = 2. The choice of items in episode #3: if get Ice Tea instead of Grenade to refill health in 3-1 it harm entertainment in two ways, fight with Pelagus with grenade from the ground is taking longer and looks sloppy, and also in begining 3-2 is too much useless free time, so i preferred more aesthetic way = 12. If to kill last Gravis by paper plane, box on the next screen can be destroyed, but i wanted to include fall down trick while using knife, box is needed to demonstate this trick = 6. At the very end added post-completion input to hug Alissa from behind = 11.
[2] Including 1 frame saved at score counting between 3-1 and 3-2.
[3] From year 2007, frame rate calculations used on site for sega senesis was changed from 60fps to 59.9227510135505 fps, so some small inconsistent (about 1 second) may happen if compare with publication time of old run.

EPISODE 1: "Night of the Mutants"

P1. Take two items at the same time as usually. P2. Using paper plane push both Gravis off-screen. Important is not just simply kill them, the but to push them off-screen, this way death animation/dialogues are much shorter and so arrow appear faster. P3. Regular solution, at least at first look, but in reality all first three panels P1-P2-P3 are one very complicated setup to Roadkill Spawn Glitch on P4. P4. Besides the fact that Roadkill miraculously escaped from cage, here also new solution with dynamite puzzle. At first use Roadkill to pull switch off-screen and when drop the dynamite in the open trapdoor, window to do it right is quite small. By the way using dynamite is cancel auto-jump reflex. Near the arrow press jump button to catch it faster. P5*. Nothing special, throw green garbage off the screen. P6. Well-known trapdoor skip, small optimisation - near the arrow used rolling movement to catch it faster. P7. By fast-walking movement pushed Gravis closer to pit. Used low whirlwind kick to kill fist Creep, plus some luck manipulation to make arrow appear a little bit faster.

P1. Quite peaceful panel, just destroy door with shoulder ram while Roadkill is looking for dynamite. Surprisely managed to squeeze two frames here. P2. The biggest improvement at this page. Starts as usually, rolling to force appearance of cocoons and kill them by paper plane, now instead of waiting of Strigil used switch and he appeared faster, used another paper plane to kill him. And then use magic of switch again to make arrow appear as soon as possible (special sequence of six turns of the switch). P3 Use knife to destroy explosive-box. Also use new slightly more effective way to skip ventilator with taking damage. P4*. Without knife and paper plane Creeps are much harder to kill. Most efficient way to do it manipulate them to fly down, then moved box to position where they both can be killed by high scissor-kick. Grap arrow at very the lowest position to get access to bottom area of P5 P5*. Used dynamite to push Gravis off-screen by explosion, and manipulate him to throw Sketch to upper platform in the last moment of his short life. Fastly kill Creep and go back to down. P6. Simple puzzle with clock. A few extra turns of magical switch to manipulate a bit faster appearance of arrow. P7*. Roadkill as usually found ice tea to refill health of his master. This panel is very long, mostly consist of fight against Mutants, tried to make it entertaining to watch. P8. At the end of P7 as always used paper plane to kill of Boss in one hit. Stand up on the barrel to cancel superhero transformation.

EPISODE 2: "Welcome to the Temple"

P1. Nothing special. Roadkill is found a power-fist as usually. P2. The first Styx is killed by Roadkill, the second is faster to kill by a paper plane, it is important to use reverse movement of paper plane, otherwise it will destroy the box with tea one the next panel. P3. While Roadkill is looking for dynamite, Sketch is aslo getting bottle with ice tea from box. Inventory is full so Roadkill is left behind, don't worry about him, he will rejoin team later. P4. Lured the stupid flying creep near the explosio blast. Jumped on the top stone-block to avoid an explosion. P5-6. Nothing special. Do not forget to take Roadkill back. P7. Many small and major changes here. At first is better position, for triple kill by paper plane, shorter window to manipulate Gravis but still possible to do it. Styx is killed by another airplane. Drink ice Tea to to refill health. Use Roadkill to scare Mongoria. P8. At end of P7 coming down at right side of arrow to be close to the Strigil. P9.Many changes: At the end of P8 jump up to get better starting position (a few pixels ahead). A new method of movement on the rope. Used special "body swap teleport" trick to throw Styx into the abyss (it is easy to force him suicide jump, but direct kill is much faster). Used two paper planes and to fastly kill all creeps. I like that during superhero transformation Sketch try to catch one paper plane back.

P1. Skipped the gate opening mechaism. P2. Roadkill is found a power-fist as usually. New slightly faster setup to kill Styx by Roadkill. P3. Pseudo-lag reduction. Also manipulate last Mongoria to make backward salto to kill her by painful paper plane crash into her heel. Route change. P4. Use Out Of Boundaries route to skip most of this panel. Need to wait for the dialogues before destoy last door or arrow will not apear at all. Saved Roadkill. P5*. Manipulated fireballs to get right pattern. Used low whirlwind kick to destoy fire-totem. P6*. The same paper plane just from the other side. P7. Nothing special. P8. Route change itself was very small timesaver, but it also alowed to save grenade which is very significant item for boss. Poor old Kung-Fung was killed by grenade and fall from page. P.S. At the end when Sketch say «Oh, Yeah», Roadkill say «Meow».

EPISODE 3: "Curse of the Dead Ships"

P1. Killed all mutants by paper planes. Last paper plane is also usefull for beating Giant Carnivorous Flower on next panel. P2. Dangerous circus trick Eaten Alive! Skipping getting dynamite. P3. Kill the creep, and then used reversed paper planes. Wait rock destraction for offscreen to has less pseudo-lags. P4. Turn over the scorpion. Impossible destruction of a spiked rock by shoulder ram. P5*.We take knife and grenade. P6* Pelagus meet grenade, both Strigils killed by paper plane. P7. Use the knife to activate switch from the other side. Skipped barrage. Mutant is lucky to survive. Jumped up at the end just for fun.

P1*. Pick up Roadkill, take a bottle of ice tea and drink it imidetely. Take the dynamite, it is necessary here to prevent scorpions appearance at P3. Used low jumps between landmines to not touch rope. P2-3. Nothing special P4. Turned scorpion around. New faster method of door breaking (recharged shoulder ram attack). P5. Skipped the bomb. P6*. Faster paper plane trick. P7. Roadkill found the knife. P8. Used knife to double punch - killed creep and also turn switch for door opening. P9*. Used grenade to force Mortus to fall from page. He has different moving patterns, so it isimportant to choose the fastest. The game has two possible endings, this one is good. Hug Alissa from behind.
END

I started planning to improve this TAS since 2015. During these years tested many improvements ideas. I pre-recorded about two dozens panels with small improvements. In total my test was almost 2000 frames faster than published TAS. Quite a decent result, but there was a fundamental problem. One particular glitch "Roadkill Spawn Glitch" was impossible to replicate. No matter how hard i tried it always was elusive. Without RSG i considered all my other improvements as pointless, perfectionism not allowed me to make and submitt new TAS with such a shamefull flaw. I don't wanted to create a colossus with feet of clay. All or nothing. Breakthrough happened only this year finally, it was weakly solved by using brute-force search. Comparing to RSG, recording the rest of game was like a walk in the park. It was a month of joy. I was really happy to finally be able to record this TAS. I hope you enjoy result of my work.

Nothing known, all panels are optimised close to death. If cancel all mentioned speed/entertainment tradeoffs game can be done in 08:27 IGT. Comix Zone is really complexity game so there's a chance that in the future new useful tricks or glitches will be discovered.
May be enemies can be manipulated to suddenly fall through floor and die after spawn? Or to make arrows to appear without killing enemies? Or to get infinity health? Or to skip long dialogues? Or something unexpected? I cannot exclude such crazy possibilities. 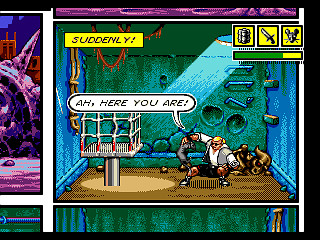 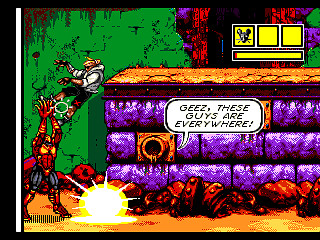 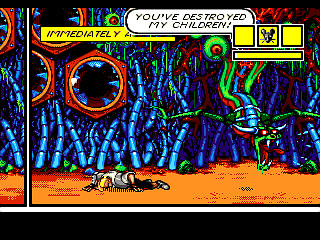 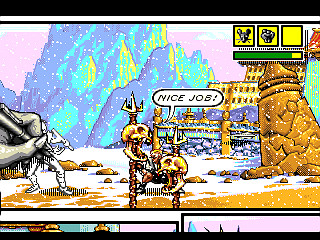 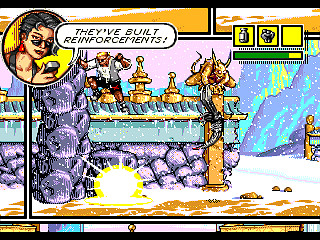 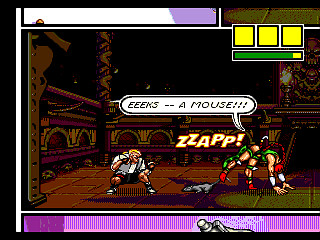 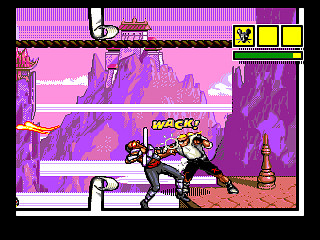 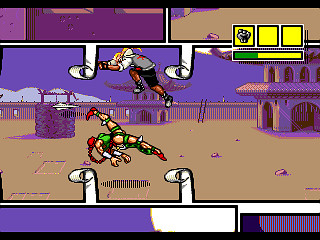 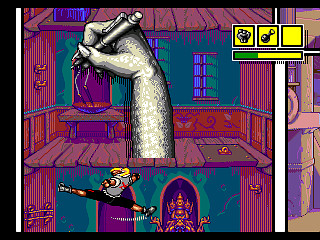 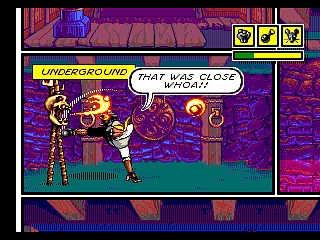 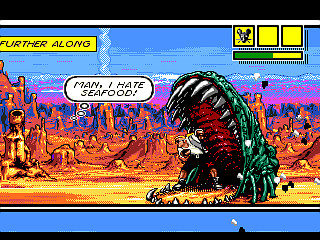 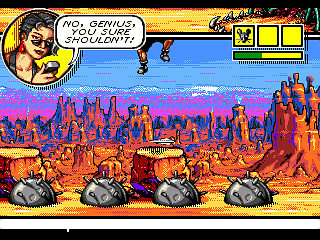 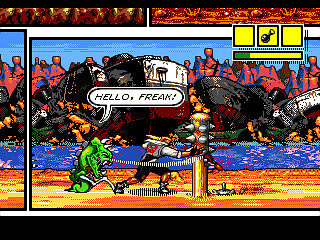 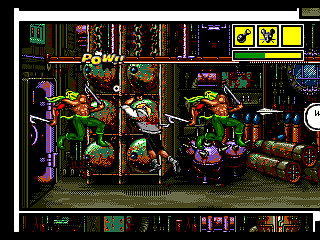 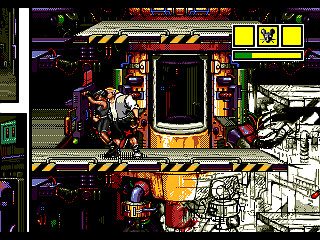