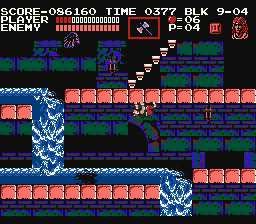 Watch Download (.fcm)
Author notes Discuss
7.18 / 10 Votes: 11
This is the story of Dracula's curse from the times before the first Castlevania game. The original name of the game is 悪魔城伝説 (Akumajou Densetsu, meaning "Legend of the Demon Castle").
This movie features the Grant path, and is about half a minute faster than the previous version and 5 minutes slower than the Alucard path played by Genisto. There is also a Sypha path movie.
This game has a different sound than most other NES games, because of a special VRC6 chip used in the game cartridge. The chip was only shipped in the Japanese versions, which is why the USA version soundtrack sounds poorer, even though it features the same melodies.
Published on 11/12/2006
Obsoletes:
NES Castlevania III: Dracula's Curse "Grant path" by VANDAL in 31:25.45