This time it's actually good. Promise.

Uh... I submitted the wrong movie. Oops. I was supposed to submit the one that skips the end cutscene, but I accidentally submitted the one that uses it.
Anyway, this movie is the one that I wanted for publication. It uses the ending cutscene and THEN allows the credits to start, since input is required after the video.
And THIS movie was supposed to be the one I submitted. It skips the end cutscene in favor of accessing the credits sooner.
Zinfidel... don't miss this chance to put the TAS info on spidey's butt at the start. :)
EDIT: everyone hates Black Cat but the hint markers definitely don't. 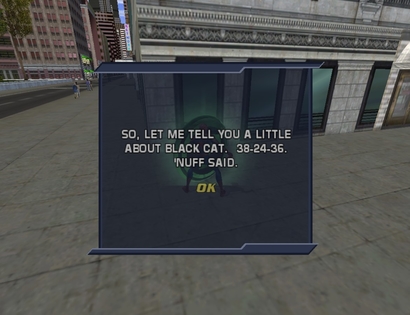 Memory: replacing file with author intended file
Memory: Claiming for judging.
Memory: Confirmed sync.
Optimization looks good. I didn't watch through all of the previous run, but I couldn't spot any mistakes.
The web swing movement is very fun here. A bunch of the skips are also very interesting. I think there could be a little better management of downtime, but that's a relatively small complaint in the long run.
Accepting to obsolete [4482]GC Spider-Man 2 by Natetheman223 in 48:44.37.
Zinfidel: Processing...
Last Edited by Zinfidel on 9/21/2021 10:26:31 PM
Page History Latest diff List Referrers