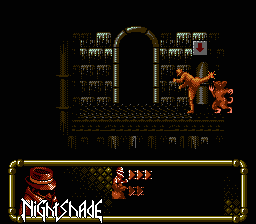 Watch Download (.fcm)
Author notes Discuss
5.43 / 10 Votes: 19
Nightshade's story begins with the murder of Metro City's hero, Vortex, at the hands of the crime lord Sutekh. Filling the need for a new superhero is Nightshade — a guy in a trench coat! Guide Nightshade through Metro City as he builds popularity and fights rats, gentlemen, female ninjas, and most importantly museum statues.
This run by Maximus speeds through the game as fast as Nightshade is able to, ignoring lesser goals such as finding the museum items, saving a kitten, or checking out the women's dressing room. It is 25 seconds faster than the previous version by the same author.
Unfortunately, the only escape from a deathtrap seen in this run is the deathtrap Nightshade finds himself in at the beginning; however, one of the highlights of this game which can also be enjoyed in this run is the hilarious dialogue, such as talk of being threatened by the legalization of wooden nickels.
Published on 12/18/2006
Obsoletes:
NES Nightshade by Maximus in 08:53.12