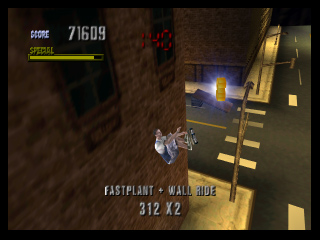 Watch
Tony Hawk's Pro Skater (1999) is the first entry in the Tony Hawk series of video games.
Austin Cannon improves the previous run by 24.8 seconds, thanks to minor improvements in each level.
If you want to see more skating action, watch his movie of the sequel and emu's run of the third game in the series. There is also a run that beats this game even faster using a replay glitch. 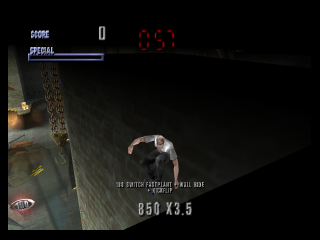 Watch
Tony Hawk's Pro Skater is the first game in a now extensive series of 10+ games that are still being created and released to this day. It was first released for the PlayStation in September 1999, and later ported to the Nintendo 64 and Sega Dreamcast. "Primitive" by today's Tony Hawk control standards, it utilizes flip tricks, grab tricks, grinds, and special tricks, which can be done on street ramps, vert ramps, rails, and all sorts of other objects.
This TAS is over twice as short as the other run. This is because it abuses a replay glitch that allows transferring skate goals from one level to another. This means you can complete the entire game without going beyond the first level.
The baseline tab shows the default movie beating the game as fast as possible without any special conditions.