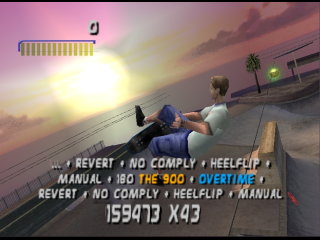 Watch Download (.m64)
Author notes Discuss
6.74 / 10 Votes: 36
Tony Hawk's Pro Skater 3 is the third entry in the Tony Hawk series of video games.
In this playaround, emu shows off by performing crazy stunts, executing large combos and achieving a really high score.
If you want to see more skating action, be sure to check the runs of the first two games in the series.
Note: Due to copyright, some of the music had to be edited out and replaced with a different track from the game for the YouTube encode so the video doesn't end up blocked everywhere.
Published on 12/17/2007
See full publication history
Game:
Tony Hawk's Pro Skater 3
Genres:
Sport