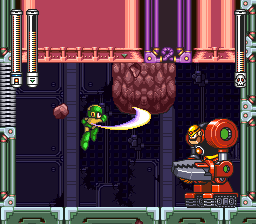 Download (.smv)
Author notes Discuss
7.11 / 10 Votes: 28
Here we see Rockman destroy Dr. Wily's army yet again, only this time on the SNES. You would think poor old Wily would learn from his past 6 mistakes, however this isn't so. On the up-side, we get another superb TAS of this famous series.
This is an improvement of approximately 71 seconds of in-game time, some of which comes from bug exploitation.
This version plays on the Japanese version of Rockman 7 whereas the previous version played on the North American version. This change affects times outside of the player's control, but still gets counted towards the movie's length.
Published on 1/16/2007 12:00 AM
Obsoletes:
SNES Mega Man 7 by Tinister in 38:54.90