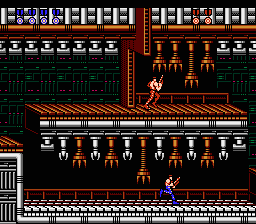 Watch on YouTube
Author notes Discuss
8.03 / 10
Published on 2/16/2007
Looks like the bare-chested man decided to bring his friend along for the ride this time. Using two players at once, adelikat brings us one step closer to perfecting Contra. This run displays many new time savers, including spread gun manipulation and 2P death skips. More details can be found in the submission text.
Note: This game was released under different names, such as 魂斗羅 (Kontora) in Japan, and Probotector in Europe. GryZor is also used in Europe on some other systems.
See full publication history
Game:
Contra
Genres:
Platformer
Shooter

Emulator Replay:
FCEU 0.98.16
Download (.fcm)
Webmasters, please don't link directly to the files. Link to this page or the front page instead.
Republication of movies from this site is only allowed under the following conditions:
Do not label them with speculations. If unsure, ask the site staff for details.