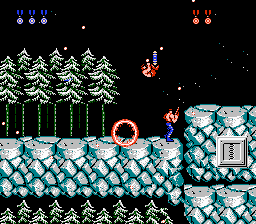 Watch Download (.fcm)
Author notes Discuss
8.2 / 10 Votes: 31
Contra is a classic action game. Equipped with heavy artillery, you must save the world by defeating the organization Red Falcon. To do this, you must make it past over 10 areas full of flying bullets and explosives and defeat many baddies.
Like in this run's predecessor, zyr2288 uses both Bill and Lance simultaneously to fire through each level. In addition, he makes use of some better routes, boss fighting strategies, and lag manipulation.
Note: This game was released under different names, such as 魂斗羅 (kontora) in Japan, and Probotector in Europe. GryZor is also used in Europe on some other systems.
Published on 4/19/2011 12:00 AM
Obsoletes:
NES Contra "2 players" by adelikat in 08:57.98