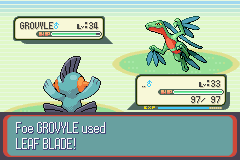 Watch on YouTube
Author notes Discuss
5.59 / 10
Pokémon Sapphire, along with Pokémon Ruby and Emerald, is part of the third-generation Pokémon games, after Pokémon Gold and Silver. Noticeable differences include the graphics and interface, Pokémon abilities, and the running shoes that allow the player to move around in the outside overworld very fast, before getting the bike.
This run plays through the game fairly fast, catching only five Pokémon, and taking advantage of critical hits and Pokémon abilities. Mudkip, the chosen starter, is a Water Pokémon that has Water/Ground evolutions. Almost all battle action involves this one Pokémon until the legendary Kyogre (exclusive to Sapphire) is captured, thus sweeping through the last battles with ease.
Note: In case there are white-screen ROM issues, the run is also reported to work on the following ROMs:
Published on 2/22/2007 4:48 PM
See full publication history
Game:
Pokémon: Ruby/Sapphire/Emerald Versions
Genres:
RPG