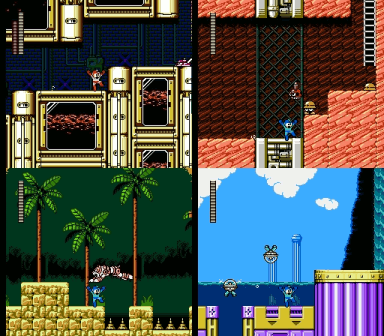 The games Mega Man 3, 4, 5 and 6 are all the same. Eight robot masters are defeated and Mega Man steals their weapons. After some kind of distraction, Mega Man attacks Wily's fortress and it typically gets blown up. If you don't believe that's true, we offer this movie.
While driving home the point in honor of our first multi-game movie, Baxter and AngerFist prove that Capcom really has been making the same game over and over again by playing Mega Man 3, 4, 5 and 6 using the same input.
No attempt is made to synchronize the endings of these games. Mega Man 6 finishes first and Mega Man 4 finishes last.
Encoder's note: There are more encodes (labeled multitrack) available in the Archive collection. Track 1 contains the audio of all four games arranged in such a way that Mega Man 3 and Mega Man 5's audio are on the left audio channel and Mega Man 4 and Mega Man 6's audio are on the right audio channel. Tracks 2 to 5 contain the sole audio of Mega Man 3 to Mega Man 6 respectively.
We recommend sitting back as far as possible and looking (staring?) at the center of the screen when watching the encode.
If you like this movie, you may like to check out some other movies in which multiple games are played simultaneously with one controller.
Published on 5/23/2007
See full publication history
Game:
Mega Man 3, 4, 5 & 6
Genres:
Action
Platform