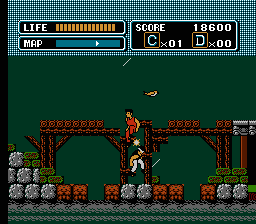 Watch Download (.fcm)
Author notes Discuss
5.33 / 10 Votes: 8
An extremely short game based on the Karate Kid movie. The author explains that some movements might not seem optimal, which is because the player has to avoid both entering bonus stages hidden everywhere around the levels and kicking bosses offscreen. If a boss goes offscreen, it regains all of its health, which of course isn't a good thing.
Had the kid been this strong in the movie, it would certainly have been… interesting.
This movie is a about a 3 second improvement over the previous run.
This run played on a real NES
Published on 6/9/2007
Obsoletes:
NES The Karate Kid by ventuz in 03:21.62