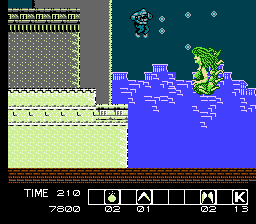 Watch
The game retells the legend of a muscular fire-spitting man called Karnov, employed by Scottish villagers to eat gypsies' babies and pillage their settlements. Except in this particular case, Karnov's full name is Jinborov Karnovski, he looks like an old-school Ukrainian, turns blue when hit, and his goal here is to take some kind of treasures from feeble, unsuspecting enemies. Later in the game he also grows a pair of wings and flies. In doing so, he strongly defies laws of physics, common sense, and notions of subtle Kid Icarus mockery.
This new version of Karnov TAS by Arc is a 00:19.58 second improvement over the previous movie by adelikat. Improvements come from better resource planning, routing changes, and optimization.
The baseline tab shows the default movie beating the game as fast as possible without any special conditions.