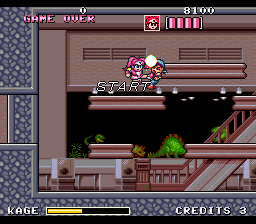 Watch Download (.smv)
Author notes Discuss
6.43 / 10 Votes: 13
This is a game based on the completely "unique" concept of an evil boss trying to take over/destroy/do whatever with the world, and despite the Earth being filled with about 7 billion occupants, you are the only one who can stop it.
At first glance it may seem odd that, although the game is two player, only one player is used, and that's Player 2. Player 2 was chosen because her aerial attack gives an enormous speed boost. It is also one of the few attacks in video games that operates on frame precision, so smashing out a 30Hz rapid-fire on the controller will lay the beatdown pretty quickly.
That, combined with the fact that half the enemies in this game are of the standard "walk around and shoot" variety, allow the heroine to zip through the game with total reckless abandon. Few games allow a TASer to do that, so this is a rare opportunity indeed.
The game is eerily similar to Megaman 7 and Megaman X. It even has pick-throwing miners.
This is a 47 second improvement over the previous movie by the use of a new trick to increase speed as well as other minor improvements. These are explained in the author's comments.
Published on 6/30/2007 12:00 AM
Obsoletes:
SNES Kaizou Choujin Shubibinman Zero "1 player" by Dark Fulgore in 13:58.37