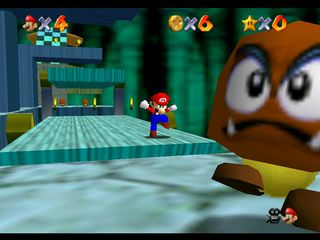 Watch Download (.m64)
Author notes Discuss
8.55 / 10 Votes: 49
Ever wonder if Mario was actually a ninja wearing blue overalls? Now you know.
This run completes the game after collecting 1 star. It was originally intended that the player collect a minimum of 70 to finish, but a few bugs allow Mario to pass through doors and barriers that require a minimum number of stars to open. Creating the fastest Super Mario 64 run was previously believed to require 16 stars, but this run manages to glitch through the Dire Dire Docks door without using MIPS the rabbit.
Mario has a very wide range of skills for mobility and some of the physics of this game are easily abused by an experienced player.
Like many other runs on this site, the goal of pure speed has resulted in the complete breaking of some games. Very little of the game's normal play remains. If you'd like to see more of what Super Mario 64 offers, see the 120 stars run.
Super Mario 64 has a history of publications on this site. If you wish to see how it unfolded since the beginning, see the page SM64TASHistory. Also, if you have a hankering to see MIPs the rabbit, the 16 stars route has been improved.
One of the authors of this TAS, Mitjitsu, has been known to make statements and/or take actions that do not reflect the values of TASVideos as a community.
TASVideos does not in any way condone the statements and/or actions made by this author.
This video is presented not to support or glorify this author, but to archive and showcase this tool-assisted superplay.
Published on 8/10/2007 12:00 AM
Obsoletes:
N64 Super Mario 64 "16 stars" by Swordless Link & Mitjitsu in 15:08.00