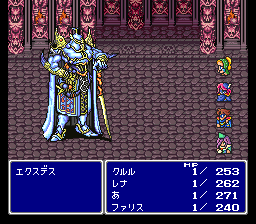 Watch on YouTube
Author notes Discuss
5.65 / 10
Final Fantasy V is probably the least known of the Final Fantasy series on the SNES, because it was never published in the USA (PS1 port and GBA remake aside).
This movie plays through the game in three and a half hours. We recommend reading the author’s comments regarding this movie to understand the manipulation used.
The boss battles, including the last boss, might be somewhat anticlimactic in this movie due to the use of a one-hit-kill spell (L5 Doom) which was made to work by varying means in each battle.
Note: Because this game was never released in the USA (aside from the PS1 port and the GBA remake) and our rules regarding fan translations are a bit strict, all text in this movie is in Japanese.
Published on 8/14/2007 12:00 AM
See full publication history
Game:
Final Fantasy V
Genres:
RPG