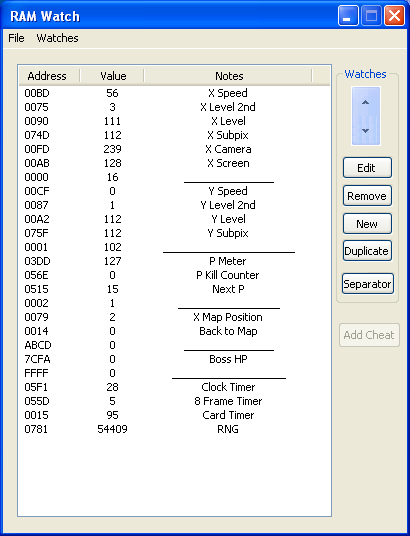 Ram Watch is a windows dialog for rerecording emulators designed to find useful ram values. It was originally developed for GENS rerecording by Upthorn and Nitsuja. Since then it has been ported to most rerecording emulators supported by the site. Therefore, it is documented here.
Ram Watch uses .wch files. Addresses Sets contain many useful addresses, allow you to download them as .wch files for the supported emulators, let you contribute your own, and provide modules to embed existing address sets on Wiki pages. Many other watch files for various games can be found on TASTools.

Ram Watch is intended to aid in making TAS movies by allowing the user to monitor a chosen set of RAM values while making a movie. Most emulators support some kind of ram watching ability but the success of this particular dialog in GENS rerecording has caused it to be ported to many emulators.
For RAM Watch to be effective, the user must already know which RAM values to watch. For that purpose, emulators with the RAM Watch dialog also support the RAM Search dialog.
Adding addresses
By clicking the "New" button (or from the menu item) a dialog will appear in order to enter an address as well as specifications about it.
Watch files
RAM Watch supports the saving of a address list into a watch (.wch) file. This file saves the list of addresses and the order in which they appear.
Auto-load
When this menu item is checked, Ram Watch will automatically load and load the most recent watch (.wch) file whenever a ROM is loaded.
Hotkeys
Ram Watch is equipped with hotkeys for various buttons and menu items.
U and D move a highlighted address up or down the list. R will remove an item from the list. N will add a new item. A duplicates the current item.
Window position
By default Ram Watch is opened next to the main emulator window. If Save Window Position is check (under the File menu) then the dialog will open in its last used position.
EmulatorResources/RamWatch last edited by adelikat 11 days ago
Page History Latest diff List referrers View Source