Noxxa: Judging.
Noxxa: I find some strategies in this run a bit suspect - such as following the any% Julius route and executing the double orb glitch there, but not actually collecting the second orb, which seems like it should save time in further boss battles. Nevertheless, this run is well received, so accepting as a new branch of this game.
It should be noted that there's another run of this category in development by hellagels, KSeptuple and Pike which has a few different goal choices, namely choosing Hard mode and deciding to use glitches to reach the Julius boss battle and defeat him. The way I see it, these goal choices fit the guidelines about difficulty and the spirit of the category better, so a run with these goals should be able to obsolete this run (assuming it is a technical improvement on this run).
feos: Ghjwtccbyu...

This was quite a bit shorter than I expected. Great going, I especially liked the route. Wasn't aware you could zip into the Arena from Floating Gardens Very nice run, voting yes.
Posted: 7/28/2014 10:53 PM
Quote 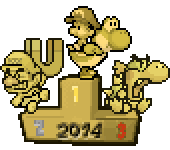 He/Him
Editor, Experienced Forum User
Joined: 6/23/2009
Posts: 2204
Location: Georgia, USA
Good run! I like this more than the similar "all bosses" run with Maxim in Harmony of Dissonance. Julius has more moves used, more variety in bossfights, and the warping uses careful setups as opposed to just being a trick you can use anywhere. I also like seeing how much more powerful Julius gets with each boss. This gets a Yes vote, but there are two things I'm not sure about: 1) Why do you take that trip near the beginning to the teleporter at the Dance Hall? It seems like it's pretty easy to visit there later when you're about to fight Headhunter. 2) Do you get the Manticore double-kill that the shorter Julius TAS used? I think I saw you collect one orb, but then a second orb lay there uncollected.
Used to be a frequent submissions commenter. My new computer has had some issues running emulators, so I've been here more sporadically. Still haven't gotten around to actually TASing yet... I was going to improve Kid Dracula for GB. It seems I was beaten to it, though, with a recent awesome run by Hetfield90 and StarvinStruthers. (http://tasvideos.org/2928M.html.) Thanks to goofydylan8 for running Gargoyle's Quest 2 because I mentioned the game! (http://tasvideos.org/2001M.html) Thanks to feos and MESHUGGAH for taking up runs of Duck Tales 2 because of my old signature! Thanks also to Samsara for finishing a Treasure Master run. From the submission comments:
Posted: 7/29/2014 4:47 AM
Quote

Joined: 10/2/2005
Posts: 3863
Maybe getting the second orb didn't save more time on killing bosses faster than it did to see the animatino?
My Chiptune music, made in Famitracker: http://soundcloud.com/patashu My twitch. I stream mostly shmups & rhythm games http://twitch.tv/patashu My youtube, again shmups and rhythm games and misc stuff: http://youtube.com/user/patashu
Posted: 7/29/2014 1:52 PM
Quote

Extremely unlikely. Otherwise other orbs would have been skipped instead of this one in the interest of saving time.
Posted: 7/29/2014 3:15 PM
Quote

Joined: 7/16/2006
Posts: 15
Location: The Spiritual Realm
TBH, I'm not sold on this route. Even with the zips, I'm unsure if it's overall faster than the current RTA route. RTA Route: Start Underground Reservoir (activate warp room) Forbidden Area Study (enter using the back door near Great Armor) Great Armor Manticore Chapel Warp (to Entrance) Creaking Skull Big Golem Headhunter Top Floor Warp (to Underground Reservoir) Legion Balore Arena Warp (to Top Floor) Death Graham I'll try and break down my reasoning why this may be the faster route. Start to Chapel Warp: RTA uses the Underground Reservoir to access both a warp room and the rear entrance to the Study, reducing the travel time to Great Armor. Once Manticore is down, the warp room is right there ready to be used. The Underground Reservoir route is slightly longer than using the Main Corridor, but spits us out at a better position, as there's no detour to get to Great Armor. It also gives us a convenient warp point for Legion later. Manticore is fought at the same strength he is in this TAS, though Great Armor would take slightly longer due to lower stats. This TAS deals with Creaking Skull first, then heads to the Inner Quarters warp room, which a decent detour from the Main Corridor. It then zips to Manticore, then makes the trek down to deal with Great Armor. While the zip definitely saves time, that time is then lost by having to make 2 trips through the Study. I'd say this TAS would come out slightly ahead if it didn't detour for the Inner Quarters warp, but with that I'm estimating both routes are pretty much dead even as of the warp in the Chapel. Entrance Warp to Top Floor (RTA) and Arena (TAS) Warps: This is where the routes really diverge, with RTA dealing with Creaking Skull, Big Golem, and Headhunter, ending with utilizing the Top Floor Warp, while the TAS route heads to the Floating Garden to zip to the Arena, and deals with Balore and Legion, ending with using the Arena Warp. My estimates have the RTA route entering the Dance Hall at about the same point the TAS route is initiating the zip, with both routes entering their respective boss rooms at the same time. Big Golem goes down first, and RTA should be entering the Inner Quarters at about the same time Balore goes down. TAS route should be entering Underground Reservoir about halfway through RTA's fight with Headhunter, and starting Legion as RTA enters Top Floor. Realistically, RTA should be warping from Top Floor as TAS finishes off Legion. TAS then still has to get back to Arena warp, putting RTA ahead. Underground Reservoir (RTA) and Inner Quarters (TAS) warps to Death: The trek from the Underground Reservoir warp to Legion is slightly longer than from Arena, so this would put TAS warping out of Arena slightly before RTA starts Legion. Legion would drop faster than it did for TAS due to +1 (or 2, from Manticore) Orbs. This should put TAS starting Headhunter at about the same time RTA is exiting Legion's room. Headhunter for TAS would go slightly faster than for RTA due to +1 Orbs. In the time it takes for Headhunter to go down, RTA should be just outside of the Arena warp. TAS should then be somewhere in the Minotaur hallway when RTA starts Balore. The higher Orb count (6 for RTA, 3 for TAS) would make Balore a fair bit faster than for TAS, reducing the cycles for phase 1 by 1. Phase 2 has reduced defense, increasing our damage output, which makes it preferable to push him into ASAP. RTA should finish Balore off a bit before TAS kills Big Golem. The time it takes both to reach their respective warp rooms is about even (would be tipped in RTA's favor if not for the elevator...), putting RTA slightly ahead at the warps. The big difference here is that RTA is warping to Top Floor while TAS is warping to Inner Quarters, giving RTA a sizable lead. Everything from here to the end is identical. Now don't get me wrong, this TAS looks really good, the route itself does look as if there was a lot of thought put into it. And really the route is my only gaffe with it, everything else looks fine (except the Crucifix use on Balore, I'm pretty sure jump kicks would have been a bit faster). Makes for a difficult vote. I think I'm gonna have to go with Meh, and hope the route I posted above is looked into a bit more for TASing.
Posted: 8/1/2014 10:07 PM
Quote

It should also be noted that the publication files are incorrectly named "castlevaniaaof-tas-juliusallbosses" (and similar) instead of "aos". Based on earlier issues as well, it seems feos' publication encodes are either rushed, or not double checked before publication.
http://www.youtube.com/Noxxa <dwangoAC> This is a TAS (...). Not suitable for all audiences. May cause undesirable side-effects. May contain emulator abuse. Emulator may be abusive. This product contains glitches known to the state of California to cause egg defects. <Masterjun> I'm just a guy arranging bits in a sequence which could potentially amuse other people looking at these bits <adelikat> In Oregon Trail, I sacrificed my own family to save time. In Star trek, I killed helpless comrades in escape pods to save time. Here, I kill my allies to save time. I think I need help.
Posted: 8/7/2014 2:24 PM
Quote

:(
Warning: When making decisions, I try to collect as much data as possible before actually deciding. I try to abstract away and see the principles behind real world events and people's opinions. I try to generalize them and turn into something clear and reusable. I hate depending on unpredictable and having to make lottery guesses. Any problem can be solved by systems thinking and acting. If TASing is meta-play, TASVideos Movie Rules are meta-meta-play!