Wally has bad habit of showing up late to work. If it happens again, he'll be fired. Unfortunately Wally has once again gone to bed without winding his alarm clock.
You play as Wally....well more specifically you are Wally's pajama clad consciousness...and you are trapped within one of Wally's own nightmares. In said nightmare, you are stuck wandering around an over-sized house full of over-sized objects which have suddenly become much more threatening than their normal-sized, real-world counterparts.
Of course, the only way to escape a nightmare is to wake up. Fortunately, within this particular nightmare, there is an over-sized counterpart of Wally himself sleeping soundly on his over-sized bed. There is also a MASSIVE alarm clock next to him...perhaps using this could wake Wally and prevent him from losing his job.
Unfortunately, as with Wally's real alarm clock, this one has also not been wound. To further the problem, the winding key is missing.
It's up to you (Wally's consciousness) to find the missing key, use it to wind the alarm clock, and wake Wally; thus getting Wally to work on time and saving yourself from the nightmare.

In order to beat the game, it's required to visit the moon twice. On a high level, the game solution can be divided into two parts, consisting of the two moon trips and the necessary events leading up to them. The images below illustrate what needs to be done. When returning from the second moon visit, there is just a short trip to trigger the ending and has therefore been left out. 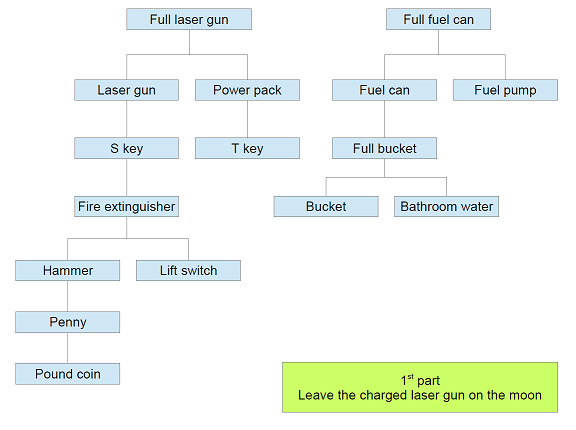 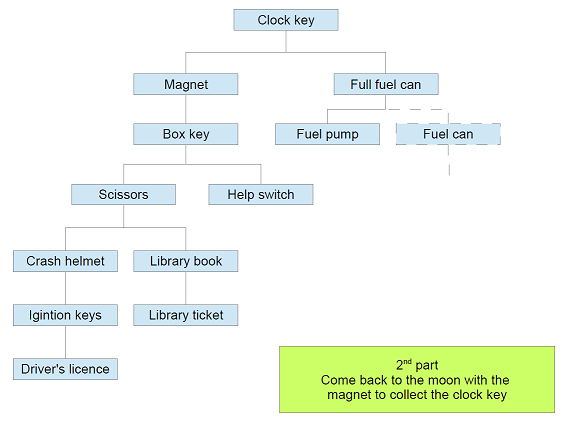 While the strict requirements for beating the game are straight-forward enough, in particular the item-carry limitation and the way the items are spread out in the house create many different possibilities when looking for the fastest route.

This section is fairly obvious. The pound coin is found near the starting point. Continuing on to the right, the lift switch is activated and we then warp to the room with the bucket. The bedroom area is then just up the stairs, where the bucket is filled and the coin is exchanged for the penny.

The options for what to do next are limited. The S key and the driver's license are both on the 1st floor and effectively blocking other sensible options than heading for floor 1. On the way, we collect the hammer, the fuel can and then exchange the hammer for the fire extinguisher. Floor 1 has two branches. The first door leads to the first branch. However, it can not be completed before the second branch. We still fill up the fuel can in here to save a few x-pixels from door transitions. The right door leads to the second branch and the roof and finally inside the chimney, where we get the S key.
Note about the health: It would have been possible to collect the drink for a small detour when filling up the fuel can. This would have cost ~160 frames. However, another health drop, the burger, would then have spawned in the green ghost room. Getting two health drops this close together and this early on in the run didn't prove that useful though since there weren't enough time-saving damage abuse possibilities up to this point.

=> Leave the scissors at the rocket

This part offers a few routing options.
While '1' is the fastest to complete part 1, '2' saves roughly 300 frames overall by eliminating some detours in part 2. However, '3' turned out to be the fastest by far, saving around 1800 frames over '1'. Most of this comes from being able to walk directly to the balloon room after returning from the moon, which cuts out a pretty significant detour in part 2.

With the laser gun and the T key, we're set up for completing the first branch of floor 1. On the way back, the fuel can is recollected and it's time for the first trip to the moon!
Note about the health: A detour of 142 frames were spent on collecting the burger in the green ghost room. This resulted in two more health items to be along the route. While it's slightly faster for a while to avoid this detour and push on, the health situation will soon become critical without the additional drops and result in big time losses later on. There are two reasons for making the health drop detour here instead of during the first floor 1 visit. The first is that the ghost movements favor this option. Some of the detour would have been replaced by waiting time. The second reason is that this offers a better spacing between the health drops, allowing for better damage abuse options.

With the full fuel can and the full laser gun in the inventory, we're set to complete the first part of the game by leaving the laser gun on the moon (this scares off the space invader enemies).

With the scissors strategically placed next to the rocket, it's just a short trip to the balloon room, where the box key is collected. After teleportation out of the balloon room, the only thing that can be done is to get the magnet. The room with the magnet can be reached either by going right and walking through the house or by going left, via a lift ride to floor 3. Time-wise, both routes are very similar, with the former being slightly faster. However, the latter is chosen for two reasons. The first reason is that we need to spend another lift ride or the lift switch won't be possible to flip after getting the magnet. The second is that the fuel can was left in the rocket room before (this was optional, but the alternative would have been a much more costly item swap in the balloon room) and will now be on the way. As a result, going left via the lift ride to floor 3 is both necessary and overall faster.

All that's left before returning to the moon is to refill the fuel can. The lift switch also needs to be flipped at this point, which only leaves one route option (teleportation out of the balloon room and getting to the lift through the library).

Holding the magnet and a full fuel can means that we're set up for returning to the moon, where the clock key now can be collected.

Taking the lift to floor 4 and then walk to Wally's bedroom is straight-forward without any alternatives to consider.

http://www.luny.co.uk/pyjamarama/maps/all.html This is a memory map for the ZX Spectrum version of this game. Although it is for a different port, it was still beneficial in understanding the mechanics of the game.
slamo: Replaced movie file with a run using the NTSC version.
slamo: Good work on this one. Thank you for explaining your route, it's clear a lot of testing was put into it. I also don't see anything wrong with the optimization.
Feedback was really limited, but mildly positive. The gameplay is basic and somewhat slow, and the reality is that C64 games like this just don't get a lot of love ratings-wise. Accepting to Vault.
Dacicus: Processing...

As the submission notes were already quite long, we felt it was better to include the following information in a forum post instead of in the submission notes. Media Format While there are disk images of this game available, we could not find reference to an official release on disk medium. We have therefore chosen to TAS this game using a tape image even though it results in a longer loading time. Region (PAL vs NTSC) For what it's worth, many C64 games released in one region work perfectly well in the other region with no glitches or impact to gameplay. This includes real media, not just emulation; while there were differences in the NTSC/PAL hardware, media from one region could be used on a system from the other region. The only times games tend to have issues being run on an out-of-region system is if the game is specially coded to deal with a particular region's frame rate. Pyjamarama runs equally well using either PAL or NTSC sync settings with no obvious glitches resulting from being played in one setting over the other. As NTSC runs at a bit higher framerate than PAL, the game can be completed faster in NTSC mode. Other than gameplay speed, the only other notable difference is the pitch of various sound effects being slightly higher pitch in NTSC mode. While we were able to find one reference to a North American release of this game, we have (as yet) been unable to confirm this elsewhere; therefore the submitted file uses PAL sync settings. If the judge/staff feel this one reference is enough to warrant the game being run in NTSC mode for publication purposes, we have also created a .bk2 using NTSC sync settings which is available in userfiles. The gameplay portion of the NTSC run is appoximately 6:31 (roughly 10 seconds faster) and the submitted PAL version is approximately 6:41. Total time comparison is roughly 11:06 for PAL and 10:45 for NTSC. Here is a comparison video of the run in both regions. NTSC is on the left; PAL is on the right. Link to video
Posted: 6/11/2019 2:27 PM
Quote

He/Him
Editor, Experienced Forum User
Joined: 6/23/2009
Posts: 2197
Location: Georgia, USA
Oddly entertaining once I realized there was a limitation on collected items. (I saw the run before I read most of the submission comments.) I get the feeling this game could've been more interesting as a few shorter puzzles to wake up Wally instead of one big one. This is basically a precursor to the Dizzy games, it seems. I found this pretty fun with its variety of scenery and items.
Used to be a frequent submissions commenter. My new computer has had some issues running emulators, so I've been here more sporadically. Still haven't gotten around to actually TASing yet... I was going to improve Kid Dracula for GB. It seems I was beaten to it, though, with a recent awesome run by Hetfield90 and StarvinStruthers. (http://tasvideos.org/2928M.html.) Thanks to goofydylan8 for running Gargoyle's Quest 2 because I mentioned the game! (http://tasvideos.org/2001M.html) Thanks to feos and MESHUGGAH for taking up runs of Duck Tales 2 because of my old signature! Thanks also to Samsara for finishing a Treasure Master run. From the submission comments:
Posted: 6/12/2019 1:02 PM
Quote

Per info in this submission discussion and some clarified rules , the NTSC version of this run is the one that should be published (if accepted).
Posted: 6/19/2019 8:42 PM
Quote

The most accurate rerecord count would probably be the PAL count plus the NTSC count. We made the PAL version first then those inputs were copied and pasted into a blank NTSC run. So the rerecords of the NTSC .bk2 file is the additional edits/rerecords necessary to resync everything for the NTSC region.
Posted: 7/3/2019 1:59 AM
Post subject: Movie published
Quote