Welcome, this is the discussion board of TASVideos.
If you have a question, please read the Site FAQ first to see if your question has already been answered.
Be sure your posts conform to Site Rules
We also have a Discord server and an IRC channel #tasvideos at irc.libera.chat...
Vote: Did you like watching this movie? (Vote after watching!)
(Link to video)
Submission Text Full Submission Page
This TAS beats Super Mario Flash in 4:43.08 using some glitches which I will explain here:
Speedglitch: This is the most important glitch in the TAS, as it allows you to gain an insane amount of speed by simply jumping into a ceiling. The way speedglitch is achieved is by uncrouching into a block while pressing a direction to move towards the middle of that block. The game notices that you are inside of collision and pushes you out, however instead of changing your position to match the edge of the collision, the game changes your speed to match the edge of the collision. Because of this you shoot out into the other direction. with 20 speed being the most amount you can get.
The intended maximum running speed is 6 pixels per frame, but you don't lose speed when going faster and holding the direction you are moving in. This is just because the game only adds more speed if you are moving slower than 6 pixels per frame, and only removes speed if you hold nothing or the opposite direction. This makes it possible to keep moving at 20 pixels per frame.
Wallclips: Without wallclips almost every strategy in this TAS would be impossible, as this glitch allows you to run through walls, bypassing most collision. When you are moving at 20 pixels per frame and aligned with the middle of a tile (tiles are 20x20 pixels), you can run directly into walls and continue running at 20 speed without losing it.
Zips: When you are moving up and inside of a wall, the game pushes you out of the block. The direction you are pushed in is determined by the player's position relative to the block, so being left of the block pushes you towards the left and being right of the block pushes you to the right (being in the middle of the block pushes you into the direction that you are facing). You can combine wallclips and zips to warp across walls and save 1 frame per tile (since you are moving at 20 pixels or 1 tile per frame, skipping 1 tile saves 1 frame).
Cornerboosts: After doing a zip however, you are not aligned with the middle of a tile anymore and thus can't do wallclips anymore. To solve this the TAS does a cornerboost, by jumping into the corner of a block the game pushes you a little forward without affecting your speed, something that can also be seen in other games.
The route:
Level 1: This level is pretty simple with just a single speedglitch and 2 zips to gain an extra 7 frames.
Level 2: In Level 2 speedglitch is used on the ceiling of the level and the rest is pretty self explanatory. After going through the pipe at the end a frame perfect jump onto the Koopa Troopa is used because it is the most optimal for that section because os not losing speed.
Level 3: For some reason, when you run on top of a platform you lose the 20 speed, which is why the TAS doesn't run through the stairs at the end.
Level 4: Here the TAS does speedglitch at the beginning but instead of uncrouching a mushroom is grabbed to increase the hitbox of the player (this is known as "growing speedglitch"). After that there is just 3 zips to gain 12 frames. There is currently no known way to avoid the damage boost (the RTA IL WR for Level 4 doesn't take damage but that is related to the resolution of the game which we of course can't change in the TAS).
Level 5: Growing speedglitch is used here too, after that the TAS flies through the level with ease and stops at the firebars to avoid taking damage. The TAS grabs the fireflower so the start of Level 7 can be done faster. Bowser is easily bypassed by doing speedglitch to fly past him.
Level 6: I don't think I need to explain this one
Level 7: Unfortunately the damage boost here is unavoidable. And the same ending strategy as in Level 2 is used here.
Level 8: After doing another growing speedglitch and some jumps to get past the platforms, this level is also easily cleared.
Level 9: This is just some more speedglitch and zips.
Level 10: Here we zip so far out of the screen that the player is not visible for the rest of the level. Then just getting past Bowser and the TAS is finished.
If you are wondering why the castle is only partially visible sometimes, this is because tiles only load their sprites when moving into the camera view.
Something to note is that this TAS uses version 3 of the game, technically it is faster to do it on version 2.5, however that version does not fully work with Ruffle and can therefore not be TASed
Samsara: File replaced with a 1 frame improvement.
slamo: Claiming for judging.
slamo: Info Teddy reviewed this and I agree with her assessment. The faster TAS apparently uses a modified v2.5 SWF, so we can't verify its authenticity. Since v2.5 currently isn't playable in Ruffle, this is the next best thing, and we would certainly rather have this than no movie at all. Accepting!
despoa: Processing...

He/Him
Experienced Forum User
Joined: 1/4/2019
Posts: 54
Location: Canada
As someone who played this game back in the day, even though I am the pretty useless GamesFan2000, this really blew my mind. Like, seriously, how is the collision detection THIS badly programmed?! In any case, it results in supersonic speeds off of ceilings and walls being ignored entirely. Yes vote.
Posted: 4/26/2022 4:13 AM
(Edited: 5/11/2022 5:04 AM)
Quote

Joined: 7/15/2021
Posts: 58
Location: United States
Syncs and dumps fine. You do need to specify -g gl like any other Ruffle game, because libTAS doesn't support Vulkan. Also make sure Ruffle doesn't open maximized because this game uses a mouse on the main menu and mismatched screen sizes causes a desync. (I'm probably the only one with this problem because I use a tiling window manager...) Regarding optimization, I did find this TAS from last year made by the same people, which is faster. I'm assuming this comes down to using version 2.5 of the game while this submission uses version 3.0, and the submission says that version 2.5 can't be used in Ruffle? I did find this Ruffle issue (first castle level results in softlock on 2.5), which is quite unfortunate. I think it's fine to accept while knowing it will be obsoleted later if/when Ruffle supports 2.5 and a new TAS is made on that version.
Posted: 5/4/2022 11:24 AM
(Edited: 5/11/2022 5:04 AM)
Quote

libTAS+ruffle does support Vulkan (Spike is referring to their TASes that were done without GL as they didn't have it installed in their distro). After failing installing 3 versions of GL and then realizing I'm an idiot who just needed to remove the spaces from the swf file. Then finding out later I didn't actually have to install GL cause Vulkan actually does work on this title, I have a complete dump. 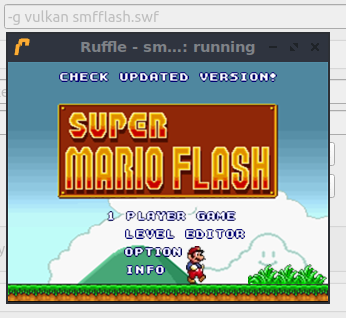 I wanted to test a few things especially Level 3 hitting koopa and trying to hold on its shell to see if it's possible to save time to use the shell as a temporary platform to save 1 jump. edit: thanks for the info - not working because no ability to grab shells However this submission simply states Super Mario Flash 1.1. edit: and judgement note says 2.5 modified maybe not - This video by the creator calls a newer (than this TAS) version as 6 https://www.youtube.com/watch?v=ME3tWXt5v0U - And a newer one as 7 https://www.youtube.com/watch?v=Y8f-76CseSw - When I tried to download this version, I only found even more latest version as E, downloadable here https://supermariflashportal.freeforums.net/ edit: info says SMF1 ver 3.0 2007 ver E.8.0 So... what's up with these versions?
PhD in TASing 🎓 speedrun enthusiast ❤🚷🔥 white hat hacker ▓ black box tester ░ censorships and rules...
Posted: 5/9/2022 11:06 AM
(Edited: 5/11/2022 5:04 AM)
Quote

In level 5 the TAS gets the flower (fire) upgrade and only uses it once where it saves time, at level 7 start. I'm think it loses time. Will watch it again later. Watched it, don't have other improvement ideas.
PhD in TASing 🎓 speedrun enthusiast ❤🚷🔥 white hat hacker ▓ black box tester ░ censorships and rules...
Posted: 5/11/2022 5:04 AM
Post subject: Movie published
Quote