Welcome, this is the discussion board of TASVideos.
If you have a question, please read the Site FAQ first to see if your question has already been answered.
Be sure your posts conform to Site Rules
We also have a Discord server and an IRC channel #tasvideos at irc.libera.chat...
Vote: Did you like watching this movie? (Vote after watching!)
(Link to video)
Submission Text Full Submission Page
Table of contents

Another World (a.k.a. Out of this World) is an adventure game designed and coded by Eric Chahi. It features Lester, a young scientist and Ferrari owner that, after a failed experiment, ends up in an Alien planet where everything tries to kill him. This is one of my first childhood experiences with a game that 'feels like a movie' and was my favourite for a long time. My first choice of a platform was MS-DOS but the emulation is not mature enough for me to use the exploration bot. Between the alternatives, the Genesis and SNES ports, I chose the former because it plays and loads so much faster than the latter (Sega does what Nintendon't).
This movie builds on many of the tricks found in the SNES movie, but adds new tricks of its own: 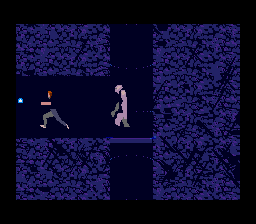 A total of 3 weeks were spent on this project, mostly on exploring the RAM map, finding level-specific triggers, route strategizing, scripting each level, running the bot, and performing manual adjustments to the movie.

Here a faster swim speed was achieved by not only holding Up, but also intermittently hitting A and L/R. This is a common pattern during the entire game where interrupting the current animation achieves a higher movement speed. In this case, a higher swim speed.

Here, as stated in the SNES version's notes, a faster run speed is achieved by not simply bunny hopping, but also performing small 'sprints' in the middle. This accelerates de overall movement. A skip was attempted here by jumping over the 'DOG' when it stumbles into the ground. However, the game does not trigger a transition to the next act if you don't use the vine to skip it, and therefore was not used in this movie.

Similar to the SNES movie, we achieve the fastest cage-break cycle by falling into the guard before he shoots.

A few tricks were used here.

Nothing new here except that the movement was optimized, as some of the rolling animations were precisely interrupted for maximum speed.

Here Moving Charge was used but only for entertainment purposes since it did not achieve any speedups. The enemy in the bridge is shot from up close to reduce lag frames.

Here the overall same strategy and tricks were used, compared to the SNES variant. Here we use used of the Moving Charge trick to accelerate the first shield creation.

Overall the same strategy as the SNES movie, except for the following optimizations:

This section was completely brute-forced. Turns out one can press one button per frame, and ALSO advance one position horizontally AND one position Vertically. The bot found a way to hit all required buttons, one per frame, for a lightining-fast eject.

Here the same strategy is used as in the SNES movie. A curious detail: this first part can be ended faster if you allow your alien friend to die. He will come back to life in the next section, but unfortunately the game ending trigger will not work. A shame, it would have been very cool.

There is space for optimizations. A better positioning after the water push (in Caves) could be achieved. I also think I could get a better Final I when/if get my hands on a more powerful computer sometime. I do not think new tricks could be found, but you never know!

26977 16407
slamo: Claiming for judging.
slamo: Great job on the optimization, as expected. This is much faster than any other speedrun of this game.
The main concern with this movie was the PAL usage. The argument was that PAL has less lag frames than NTSC, and while this is true, a quick comparison will reveal that NTSC is still overall faster due to the higher framerate. Our rules state that NTSC is "usually preferred" over PAL, and this is definitely one of those cases where that applies. Given the good faith belief that PAL would be better, the difficulty of resyncing this run on the NTSC version, and the high quality of the optimization, I'm going to give this one a pass for now. However, a similarly optimized NTSC run should obsolete this, even if there are no other improvements. There are plans to make an improved version anyway, so maybe it won't come to that.
Accepting.
EZGames69: Processing...
EZGames69: Changed the game name to be consistent with the SNES publication.

Squints at the E marked for PAL Another/Out of this World has an American version on Genesis... want to explain not using that version please.
Disables Comments and Ratings for the YouTube account. These colours are pretty neato, and also these.
Posted: 7/7/2022 11:50 AM
(Edited: 13 days ago)
Quote

Hm... I don't remember Another World / Out of this World having funky background music. Reminds me of certain DOS games on different sound cards. Also, I remember this game being glitched enough to have some skips, although I can never remember exactly how the skips work or why. IIRC, a lot of the game is scripted. Is the difference of frames / lag between E and U ROMs solely because of implementation of PAL vs NTSC difference? After all, PAL is 50fps and NTSC is 60fps (approximately, if not exact).
Posted: 7/10/2022 6:18 AM
(Edited: 13 days ago)
Quote

Indeed, the MS-DOS version does not have intra-level music; this was added for the Gen/SNES ports. To be honest, I dislike the decision for three reasons: 1) The music isn't good at all, 2) The lack of music in the DOS port helped give the game a sense of being lost and clueless in an alien world. Music tends to set up the mood and indicate whether or not you're in danger, and that's not the idea here. 3) They took out the amazing eurobeat ending music by Jean-Francois Freitas! The game is mostly scripted. For example in the first level you technically can jump over the beast and arrive to the end of stage trigger. However, since you did not use the vines to skip the beast, the end will simply not trigger. However, other parts of the game allow for skipping since the trigger for advancing the state is simply that you arrive to a given room. Therefore, as long as you find a way to physically clip across walls/doors/guards, you can skip intermediate states. I did some research and I think I understand now what's going on with this game. The game itself runs at ~12 fps, which is resolved by advancing one game frame every 4 or 5 video frames (similar to the Prince of Persia NES movie I worked on), notwithstanding lag frames from excess of active objects in the screen. The difference between E and U is the number of lag frames introduced to keep the game running at 12 fps, even though the console runs at 50 or 60fps. The fact that the U version requires more lag frames to keep 12fps doesn't mean that the game runs slower or a movie for that version would be slower (as I mistakenly thought at the beginning). So therefore there should be no difference in look&feel between the two versions.
Posted: 7/10/2022 8:36 AM
(Edited: 13 days ago)
Quote

Oh nice!
Warning: When making decisions, I try to collect as much data as possible before actually deciding. I try to abstract away and see the principles behind real world events and people's opinions. I try to generalize them and turn into something clear and reusable. I hate depending on unpredictable and having to make lottery guesses. Any problem can be solved by systems thinking and acting. If TASing is meta-play, TASVideos Movie Rules are meta-meta-play!
Posted: 7/10/2022 11:50 PM
(Edited: 13 days ago)
Quote

Joined: 1/24/2018
Posts: 180
Location: Stafford, NY
But that shouldn't excuse using an E ROM for the submission in the first place when there was a good dump U version available. Perhaps the current submission file should be replaced with the one that was resynced on the U ROM?
^ Why I don't have any submissions despite being on the forums for years now...
Posted: 7/11/2022 3:36 PM
(Edited: 13 days ago)
Quote

Why not exactly?
Warning: When making decisions, I try to collect as much data as possible before actually deciding. I try to abstract away and see the principles behind real world events and people's opinions. I try to generalize them and turn into something clear and reusable. I hate depending on unpredictable and having to make lottery guesses. Any problem can be solved by systems thinking and acting. If TASing is meta-play, TASVideos Movie Rules are meta-meta-play!
Posted: 7/11/2022 4:16 PM
(Edited: 13 days ago)
Quote

Looking into this a little deeper, the NTSC version runs tangibly faster than the PAL version, you can tell just from listening to the opening music. The NTSC version does have more lag frames, but the higher frame rate still makes it faster overall. Although one nice thing is that the amount of non-lag frames is nearly identical, so runs on different regions wouldn't be that hard to compare. I'm not opposed to allowing PAL here, but a similar NTSC run should outright obsolete this.
Posted: 23 days ago
(Edited: 13 days ago)
Quote

So, are there any plans to resync this on NTSC? And how difficult would it be?
Posted: 22 days ago
(Edited: 13 days ago)
Quote

It would take a significant amount of work because, to maximize lag manip, I'd have to re run the bot all over. The process would take around two weeks of work. My plan is to do that next year, along with trying some new route optimization ideas, when I have access to more powerful system and can use an even deeper exploration
Posted: 14 days ago
(Edited: 13 days ago)
Quote

Moving charge trick is just beautiful. Excellent TAS. Voted yes. I think it is wrong decision to rename it. Another World is main name of this game. It is more famous and recognizable than Out of This World. Besides you even can see correct name of game appear at title screen.
I show you how deep the rabbit hole goes. Current projects: NES: Tetris "fastest 999999" (improvement, with r57shell) Genesis: Adventures of Batman & Robin (with Truncated); Pocahontas; Comix Zone (improvement); Mickey Mania (improvement); RoboCop versus The Terminator (improvement); Gargoyles (with feos)
Posted: 14 days ago
(Edited: 13 days ago)
Quote

EZGames69 should've probably referred to what they wrote as "Changed the game name to be the American Title" since when present the American title is used in games first, then the European one. As long as the description states; "Out of This World, known as Another World in Europe" it'll be fine.
Disables Comments and Ratings for the YouTube account. These colours are pretty neato, and also these.
Posted: 14 days ago
(Edited: 13 days ago)
Quote

That’s what im doing yes
[14:15] <feos> WinDOES what DOSn't 12:33:44 PM <Mothrayas> "I got an oof with my game!" Mothrayas Today at 12:22: <Colin> thank you for supporting noble causes such as my feet MemoryTAS Today at 11:55 AM: you wouldn't know beauty if it slapped you in the face with a giant fish [Today at 4:51 PM] Mothrayas: although if you like your own tweets that's the online equivalent of sniffing your own farts and probably tells a lot about you as a person MemoryTAS Today at 7:01 PM: But I exert big staff energy honestly lol Samsara Today at 1:20 PM: wouldn't ACE in a real life TAS just stand for Actually Cease Existing
Posted: 13 days ago
Post subject: Movie published
Quote