Welcome, this is the discussion board of TASVideos.
If you have a question, please read the Site FAQ first to see if your question has already been answered.
Be sure your posts conform to Site Rules
We also have a Discord server and an IRC channel #tasvideos at irc.libera.chat...
Vote: Did you like watching this movie? (Vote after watching!)
(Link to video)
Submission Text Full Submission Page
Rally Bike is a NES port released in 1990 of an arcade racing game released in 1988. You control a bike… and that's about it! Hit the gas, don't crash, and don't run out of gas.
Hello all! I'm juef, and I used BizHawk 2.8 with its NesHawk core to make two versions of this TAS which are identical up to somewhere in the last race:

The movement for this game is very straightforward. The hitboxes are arguably not the best, and crashing means restarting the race from the beginning with one less life. Helicopters make appearances from time to time to give you powerups, ranging from invincibility to helper buddies that make other racers crash. Those are fun! But for a TAS, not as useful as gas refills and turbos.
- Gas refills are awesome because you need to get gas in every race. The only ways to do so are with helicopter drops ('GAS' and 'HI' giving respectively a bit, and a less tiny bit of gas), and by stopping at a refill station. The latter is super slow: the manual states that `When you stop for gas, remember that 5 racers will have to pass you before you can go on.` Neverless, we still have to do it when we don't get enough from helicopters.
- Turbos make your max speed a little higher for the remainder of the race. Obviously, we want them, and as early as possible.
Aside from the obvious movement to not crash, most of the time TASing this game was spent manipulating the helicopter drops and other racers. The drops seem to be affected by the player's position and movement, and, by extension, other racers. They, however, can not always be manipulated finely: a movement different by a single frame will often not change the drop. In some scenarios where movement is limited by the track and/or by other racers, the drop was not optimal, but helpful nonetheless.
Another consideration is the leftover gas: there is a countdown at the end of each race, so we want to end with as little gas as possible.
Between levels, you can choose one piece of equipment for the next race. According to the manual, one engine helps with acceleration, while the other gives a better top speed… but from my testing, neither of them makes the player go as fast as the 'slick' tires, which are always selected except for one race, where the 'brock' (yeah, I know) tires prevent slowdown because of the terrain. The 'rain' tires only seem to help with the oil spills with matter very little, if at all, in a TAS.
Finally, there is a bonus race at some point, and the easiest and fastest way to end it is to crash. Just tell the organizers your steering was stuck, and live with the shame and judgement from your friends and family forever.
After five non-bonus races, the game loops. We're not playing Uniracers or Sonic so we don't like looping and end the movie at that point.

Unless I missed something big or glitches are discovered, possible improvements could come from better manipulating helicopter drops and other racers. 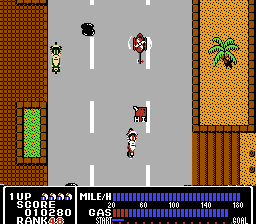 Encode of the second movie (which ends input early):

User movie #638051848574916873 I improved this run. It is 684 frames faster at the fastest crossing of the finish line of the final race. I think early input end is fun and interesting here so I am going for that, manipulating an invulnerability can greatly shorten input, I'll work on that too. Not sure which would be preferred for submission. I'll submit once I have that worked out and an encode, might be a few days
It's hard to look this good. My TAS projects
Posted: 4 days ago
Quote

Joined: 1/29/2007
Posts: 195
Location: Québec, Canada
Given the new version by adelikat, this submission can be removed. Thank you!
Posted: 4 days ago
Quote