Welcome, this is the discussion board of TASVideos.
If you have a question, please read the Site FAQ first to see if your question has already been answered.
Be sure your posts conform to Site Rules
We also have a Discord server and an IRC channel #tasvideos at irc.libera.chat...
Vote: Did you like watching this movie? (Vote after watching!)
Submission Text Full Submission Page
Uses FCEU rerecording 15.
This movie completes the B-mode of Tetris at level 19-5 in 3032 frames (51 seconds). This is an improvement of 34 frames over my previous version; 8 frames were saved from slightly better manipulation, and 28 frames were saved from ending the movie a little earlier than before. It was very hard to save any time from manipulation because (1) I had greatly optimized the manipulation in my previous movie, and (2) whenever I managed to save frames, they would usually be lost on later manipulations. A few other notes:
Many thanks to alden, who discovered that the blocks can be manipulated by pressing down, left, and right all at once (as opposed to pausing, the previous method of manipulation). This trick doesn't seem to save any time, but it makes the movie much more enjoyable to watch.
NesVideoAgent: Hi! I am a robot. I took a few screenshots of this movie and placed them here. Here goes! Feel free to clean up the list. 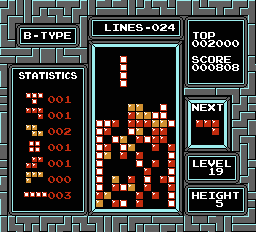 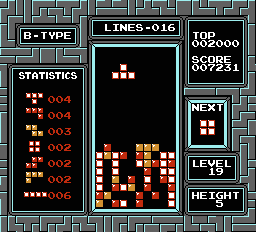 adelikat: Accepting for publication (alongside the existing NES Tetris movie), and processing.

Yes, my other movie was like that as well. In order to clear all blocks, I have to make one extra line (otherwise I'll have a remainder of 2 blocks). Otherwise, I think the blocks are all used optimally, so the time that could be saved from not making that line would be quite small. I think it's worth it to be able to clear every block from the playing field :)
Posted: 7/10/2007 9:11 AM
Quote

Experienced Forum User
Joined: 10/24/2005
Posts: 1080
Location: San Jose
Off topic: I find it funny that the most popular online tetris site in this community (sprintgod's tetris) uses "down, left, and right" as a fast forward command on replays. On topic: I like this movie (more-so than the first one, which I refrained from voting on). Although we already have very nice tetris movie on this site, I believe that this one deserves publishing too.
<agill> banana banana banana terracotta pie! <Shinryuu> ho-la terracotta barba-ra anal-o~
Posted: 7/10/2007 5:27 PM
Quote

Joined: 2/11/2007
Posts: 1522
Nice! Haven't watched it yet but I'm sure it's good ;) Impressed that you saved 8 more frames with the manipulation -- I tried a little bit and made it longer. I think the luck manipulation is a little more complex than we suspect, I want to look into that for the A version.
I make a comic with no image files and you should read it. While there is a lower class, I am in it, and while there is a criminal element I am of it, and while there is a soul in prison, I am not free. -Eugene Debs
Posted: 7/10/2007 7:27 PM
Quote

While making this movie, I discovered that holding down as the current block hits the ground will sometimes change the order of blocks. It seems to have very limited application, though (since you can only choose from one extra block). I used it once or twice in this movie.
Posted: 7/12/2007 9:33 PM
Quote

Joined: 1/15/2006
Posts: 333
Location: Bangkok, Thailand
This is because holding down for at least four frames (at least two frames before the block lands, the frame it lands, and one frame after it lands) causes the next block to appear one frame earlier. Holding down for at least six frames will give you points as well; one point for every two frames beyond the necessary four. There's also a small window for manipulation just after the current block lands and before the next block appears (starting at 11 frames before it appears). This window is five frames long, which allows pressing and releasing left+right+down up to three times, each of which delay the next block by one frame (typically giving one the option between four different blocks, which is usually enough). This has a nice side-effect as well, in that it doesn't cause the current block to flash, but only the next block, which is even less distracting. I know all this because P.JBoy suggested that perhaps Acmlm existing run could be modified to use this form of manipulation instead of pausing. I decided to give it a shot, but unfortunately, it's not possible. Left+right+down interferes with moving pieces left and right, and with pieces stacked very high, the window for manipulation just isn't large enough.
print reduce(lambda x,p:p/2*x/p+2*10**1000,range(6643,1,-2))
Posted: 7/19/2007 2:34 AM
Post subject: Movie published
Quote