This page documents information about John Romero's Daikatana. Many of the tricks demonstrated here are near impossible in real time and documented for the purposes of creating Tool-assisted Speedruns.
This is a collection of information for John Romero's Daikatana, a First-Person Shooter with RPG elements, made by the creators of Doom and Quake with similarly designed levels, weapons and music.
This information is geared toward tool-assisted speedruns, though it may also be useful for real-time speedruns.
Table of contents

With little information in-game or even on the Internet, it's easy to not know these controls:

Hiro's speed when walking forward will be referred to in this guide as "movement speed" or "forward speed". This is the main intended way of advancing through the game's levels. It starts at 1.40 units per frame and will increase with Speed stat upgrades. There is no acceleration; press C-Up for one frame and you will start moving 1.40 units at a time. There is deceleration after the button is released though.
You can also move backwards at half of your forward speed or strafe at roughly 1 unit/frame. Both of these increase slightly as well with Speed upgrades. If you move forward and strafe against a wall, you will not lose any speed, but only move in the direction that's perpendicular to the wall.
See Straferunning below for more movement tech.
Jumping is very simple, as you only have to press the button for one frame and Hiro will do his standard jump as high as he can. You can't jump higher by holding the button longer and you also can't steer yourself once you're in the air. This may seem to limit its usefulness, however this behavior can be abused to preserve high speed in the Weapon Boost glitch.
When you land from a jump, you can jump again if you're within 5 units of the floor's collision box. This will preserve your jumping speed as the game doesn't process that you've hit the floor, therefore it is known as a "frame-perfect jump". If you're landing from high enough, this second jump can be a very small jump with decreased Y-Speed. It's not known why this occurs, but if necessary, you can fix it by landing fully on the floor and starting a new jump.
You cannot activate buttons or doors while jumping. You will have to land for a frame or two, even if this makes you lose speed. Remember not to press A and R at the same time though, as that will make Hiro crouch.

Turning is slow in this game, especially compared to Hiro's movement speed. A full 360-degree rotation takes 139 frames with the default Control Stick sensitivity and 111 frames on the highest sensitivity, a difference of 28 frames.
Due to the number of times you turn in the game, including during cutscenes where Hiro may often make 180-degree turns, changing the sensitivity saves a lot of time overall. It's four frames faster to change it after the game has started, even accounting for the pause button presses.
Most buttons and doors require you to be within certain facing angles to be able to activate them with A, though some buttons can be activated no matter which direction you're facing, like the last button in E1M1.
Use the Hor Facing Angle and Ver Facing Angle memory addresses to judge where Hiro is looking. Along with the position and speed values, they are very helpful for comparing paths between two TASes. 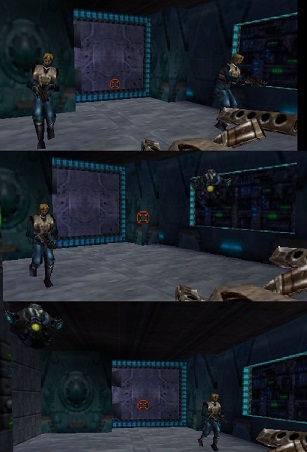 Nearly all of the lag in this game is "invisible"; in other words, BizHawk does not detect it. Even so, everything on the screen will freeze or move slower as the game tries to process more things at once.
You can avoid or reduce lag by moving differently or turning the camera so as to load different objects onto the screen. You can also shoot some objects, like enemies, before they appear on the screen. For example, with the Ion Blaster, ricochet the shots off walls to hit them while they're still out of sight.
Lag is one of two reasons this game is not hex-friendly, the other being RNG.

The RNG for this game controls enemy position and sometimes even the type of enemy that appears. For example, in the second-to-last room in E1M4, the two enemies guarding the Daikatana chamber can spawn as either common guards or floating turrets. It is not yet known how to affect this, though a guess is starting the level on a different frame (as it was discovered while fixing a desync in E1M3).

E1M3 is the only level so far known to desync, and only around the two timed door guys. Be sure to play back your input fairly often, from the beginning of E1M3 or start of the TAS, to catch desyncs before they ruin a run.
You should also not use the Control Stick on BizHawk's Virtual Pad, as this may cause desyncs as well. Use the UDLR keyboard shortcuts instead.

There is an invisible box blocking a door until its "opening" animation has finished. In other words, the visible door has no collision; instead the collidable box despawns after the door fully opens. While you're waiting to proceed, you can shoot enemies in the previous room or align yourself better to enter the door.
For other paths that are blocked by an invisible box, like the Daikatana chamber bridge in E1M4, you must press the necessary buttons to get rid of the invisible box. If it would save time, you can also attempt a Boost Through Walls to get through it.

There are two types of cutscenes: the ones outside of levels that can be skipped with A, and ingame ones that cannot be skipped. The often long length of the latter kind necessitates any method possible to avoid activating the cutscene.
Once the Side Winder is obtained or the Speed stat is high enough (values shown below), many cutscene triggers can be simply jumped over, being about 20 pixels wide. Some cutscenes, though, must be played in order to unlock the next path (E2M1 Charon's boat) or start a boss battle (E3M4 boss).
In many cases, a cutscene will start with Hiro slowly turning to look at an object. You can save time by turning to face that direction before entering the cutscene. In addition, you can optimize Hiro's position to shorten the time it takes him to face the second object (and third, and so on).
Sometimes you can skip the first of two cutscene triggers and activate the second with no consequences. This works for the E3M4 boss (though you still need all pieces of the Purifier sword to activate the second).

EXP, or Experience Points, are gained by killing enemies. For example, common guards give 1 EXP, ceiling-mounted turrets give 2 EXP, and each of the bronze statue minibosses of E2M3 give 4 EXP. No matter your stats, the same enemies will always give you the same amount of EXP.
Unlike the PC version, you don't get to choose where your stats are placed when each is leveled up.
Instead, each stat is automatically upgraded at certain EXP values:
There are also temporary powerups placed in the levels for each of these stats, determined by color. A green outline will appear around the currently powered-up skill. Each lasts around 20 seconds in a less laggy area, or at least 2.5 seconds longer in a laggy area, and increases the skill by about 25%.
The most important stats for a TAS are Speed and Acro, in that order. A higher Speed stat will save time in all of the run's movement; Speed upgrades save roughly 1 frame out of every 10 after they are acquired. A higher Acro stat would be used for vertical skips that aren't yet possible with your current Speed and recoil-heavy weapons.
Power and Attack are your damage output and range of fire, respectively. Their values don't change very much from level 0 to level 5 though. For example, the Slugger's rate of fire in the true final boss fight in E4M6 is every 8 frames on Attack 0 and every 6 frames on Attack 5. Speed and Acro are more important for a TAS.
Some enemies can be respawned by entering a loading zone and coming back, but this often wastes too much time. EXP is best gathered as a side goal to beating the missions as fast as possible. However, it will pay off in the long run to spend a few frames at a time on shooting enemies to level up the Speed stat.

Speed values are from forward Run speeds. The Run/Walk switch resets to Walk at the start of each mission; remember to set it back to Run!

Weapons should only be picked up if they will be used in the run, and avoided if they won't be. This will make the desired ones easier to switch to later.
"Cooldown" is defined here as the entire time it takes for the weapon to shoot, reload, and be ready to shoot again.
"Rounds" are defined here as max ammo / ammo used per shot.
TODO: Find the earliest obtainable mission for the E4 weapons, and maybe add weapon vs. boss/miniboss damage chart, to determine best weapon for each (note that they vary with Power and Attack values)

Weapon Boost is the biggest glitch in the game. It abuses the recoil of many weapons to allow you to go much faster horizontally and vertically, with the potential for major skips within levels.
The following values were gathered using Speed stat 2 and Acro stat 2.
Optimal input may vary based on the amount of lag in the current room.

Make sure you don't run out of ammo for the weapons you're boosting with. You can collect more Shot Cycler and Side Winder ammo in several places in E1, but after that, there aren't any more good boosting weapons until E3M2. Conserve shots for skips or long hallways if possible.

The geometry of higher-poly walls and intersections of walls sometimes creates small platforms high off the floor that can be jumped or boosted to. By doing a Jump Boost off of these corners, you can reach higher places.

For navigating when on top of a level or out of bounds.

Used for testing different things. Enter these at any level intro (where it says Episode 1 Mission 1). Never use in a real testrun or submission, as they may change RNG or other memory addresses!