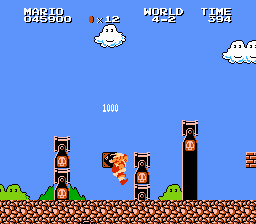 Watch
Mario has eaten too many poisonous mushrooms and as a result, decided to go on a furious killing spree. In this berserker state he has also gained the new secret ability to walk through walls at will.
Wondering how some tricks work? Information is available at Super Mario Bros. Tricks page.
This movie is 27 frames faster than the previous version due to new improvements in 1-2 and 8-4.
Watch this run being played back on a real console.
This is the real Super Mario Bros 2. It was never officially released in the USA and Europe. It was later ported to SNES, and released as "Lost Levels" on Super Mario All-stars, which we have a warpless Mario run of.
FDS means Famicom Disk System. It was a Japanese disk-unit version of the NES. 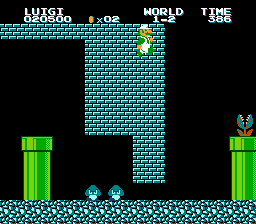 Watch
This is a TAS of the Japanese Super Mario Bros. 2, a.k.a. 'The Lost Levels', using Mario's brother Luigi. He jumps higher than Mario, but acts slower in many ways. However, the movie is in no way worse than the Mario version - some new creative solutions have been found.
This movie uses warps. For a warpless version, see [4389] SNES Super Mario All-Stars: The Lost Levels "warpless, Luigi" by DaSmileKat in 34:45.63.
This is an 110 frame improvement over the previous movie by Phil.
Watch this run being played back on a real console.