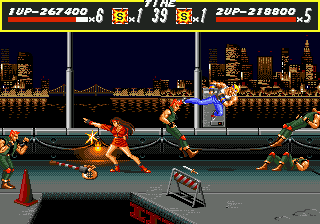 Watch Download (.gmv)
Author notes Discuss
6.68 / 10
A typical streetfighting game which spawned the popular Streets of Rage trilogy. This game is rumored to have used the same engine as Golden Axe, which is why the A button summons magic (sort of) to damage all enemies on screen, instead of doing some sort of roundhouse, like almost all other beat'em ups.
Completed on the hardest difficulty.
Compared to the previous movie, this is over 10 minutes faster. Primarily due to the use of 2-players and a glitch that skips most of the last level.
Details can be found in the authors' comments.
See this run replayed on console.
One of the authors of this TAS, Mitjitsu, has been known to make statements and/or take actions that do not reflect the values of TASVideos as a community.
TASVideos does not in any way condone the statements and/or actions made by this author.
This video is presented not to support or glorify this author, but to archive and showcase this tool-assisted superplay.
Published on 2/19/2008 12:00 AM
Obsoletes:
Genesis Streets of Rage "1 player" by SprintGod in 29:55.07