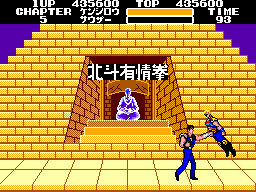 Watch on YouTube
Author notes Discuss
5.16 / 10
Published on 8/14/2010
Hokuto no Ken is one of many video games based on the long-running manga Fist of the North Star (北斗の拳, Hokuto no Ken). This game follows Kenshiro across a world devastated by nuclear war as he journeys to rescue his girl, Julia, from his rival, Shin. To beat Shin's seemingly unstoppable army, Kenshiro uses the secret fighting technique hokutoshinken to twist his opponents' muscles until they literally explode.
The author, arukAdo, goes through this game very quickly by flying over most of the levels and beating up the bosses quickly. (This "warp" is allowed whenever you beat the previous stage's boss without losing any health. A similar warp gimmick occurs in the bonus stages of Mighty Bomb Jack.)
See full publication history
Game:
Hokuto no Ken
Genres:
Fighting

Emulator Replay:
Dega 1.16pre, MAME Core
Download (.mmv)
Webmasters, please don't link directly to the files. Link to this page or the front page instead.
Republication of movies from this site is only allowed under the following conditions:
Do not label them with speculations. If unsure, ask the site staff for details.