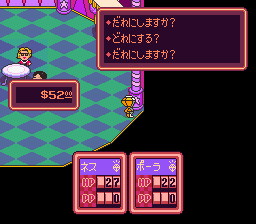 Watch on YouTube
Author notes Discuss
7.02 / 10
Published on 9/28/2010
EarthBound is a great RPG, designed by Shigesato Itoi in 1994-1995, and is also known by the name Mother 2.
It is best described as "random", in a good way. The game has a great emphasis on a humor, and indeed many things in the game are almost caricatured, from subplots to characters. It also has a versatile soundtrack.
pirohiko and mugg made a movie that is 39:18.83 faster than pirohiko's other Earthbound run, by entering a debug menu by doing a glitch inside the Boogey Tent. This debug menu cannot normally be accessed except through this glitch on the Japanese version, or Game Genie codes.
See full publication history
Game:
EarthBound
Genres:
RPG