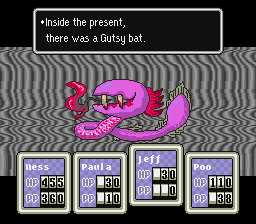 Watch Download (.smv)
Author notes Discuss
8.64 / 10 Votes: 73.5
EarthBound is a great RPG, designed by Shigesato Itoi in 1994-1995, and is also known by the name Mother 2.
It is best described as "random", in a good way. The game has a great emphasis on a humor, and indeed many things in the game are almost caricatured, from subplots to characters. It also has a versatile soundtrack.
Our description for the previous movie stated, "Although this being a speedrun (tool-assisted at that), most of the plot of the game is intact...". This time around, not so much. Thanks to some collision detection bugs, including one that shows that the Skip Sandwich is a fitting name for the item in ways the developers never intended, the author is able to move around the game's areas freely, completing the bare minimum number of tasks needed to keep the final battle from locking up.
Also unlike the previous movie, this one does use a death as a shortcut. However, the teddy bear survives this time around.
Published on 6/13/2009
See full publication history
Game:
EarthBound
Genres:
RPG