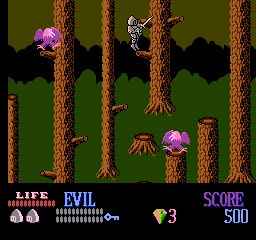 Watch Download (.fmv)
Author notes Discuss
6.94 / 10 Votes: 18
This is an improved version ― 72 seconds faster than previously.
Most of the improvement comes from heavy abuse of luck to get blue and pink potions when they are most useful.
In this game you're an armor-clad knight with a big sword. You collect gems to bribe a red knight, kill evil beasts and rescue several "distressed damsels".
Walker Boh completes the game shorter than anyone imagined, and discovered a few nice tricks / glitches.
Long live game physics where a little bird can toss heavy metal knights by several meters!
This movie takes advantage of a glitch that allows to re-enter the first map and substitute the last few levels with the first levels. There is also a movie that does not use this trick. It's slightly longer.
Ps: Do you want to see more adventures of the iron-clad hero of this game, Kuros?
Read the Knights of the Old Coding online comic. It's hilarious.
Published on 8/17/2004
Obsoletes:
NES Wizards & Warriors by Walker Boh in 12:05.25