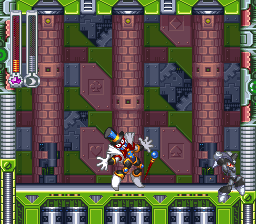 Watch on YouTube
Author notes Discuss
8.95 / 10
Published on 2/23/2011
Rockman & Forte (ロックマン&フォルテ), known as Mega Man & Bass in the western world, used to be the last game chronologically released for the original Rockman/Mega Man series, until Rockman & Forte Mirai kara no Chōsensha (ロックマン&フォルテ 未来からの挑戦者) was released on the WonderSwan handheld system.
This game bears a striking resemblance to Mega Man 8, not only in style, but in excessive graphic detail. Similarly to Mega Man X4, the player has the option to choose one of two characters to play through. In this run, Forte is chosen.
sparky takes the game apart with some glitches that allow Forte to zip around in walls. This run is 00:59.83 seconds faster than the previous run, mostly due to new glitches. Read the author's comments for more details.
There are two more Rockman & Forte runs to watch on this site; featuring completion of the game with Rockman as fast as possible and collection of all CDs with him.
Obsoletes:
SNES Mega Man & Bass "Forte" by FractalFusion in 29:08.07

Emulator Replay:
Snes9x 1.43 v17
Download (.smv)
Webmasters, please don't link directly to the files. Link to this page or the front page instead.
Republication of movies from this site is only allowed under the following conditions:
Do not label them with speculations. If unsure, ask the site staff for details.