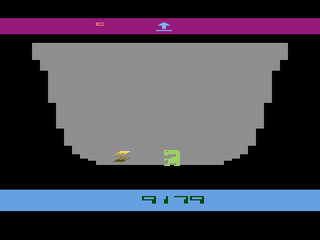 Watch Download (.bkm)
Author notes Discuss
3.73 / 10 Votes: 32
E.T. The Extraterrestial, based on the film of the same name, is one of the worst video games ever released. It contributed to Atari's massive financial losses during 1983 and 1984. As a result of overproduction and returns, millions of unsold cartridges were buried in an Alamogordo, New Mexico landfill.
The game was developed in five weeks and Atari decided to skip audience testing for the product due to time limitations.
For our first Atari 2600 movie, partners in crime adelikat and Cardboard assemble the interplanetary telephone and call E.T.'s home planet in a record-breaking 00:25.25 seconds. For details on how they did it, read the authors' commentary.
Published on 10/27/2012 12:00 AM
See full publication history
Game:
E.T.: The Extra-Terrestrial
Genres:
Adventure

Emulator Version:
BizHawk 1.2.0
Webmasters, please don't link directly to the files. Link to this page or the front page instead.
Republication of movies from this site is only allowed under the following conditions:
Do not label them with speculations. If unsure, ask the site staff for details.