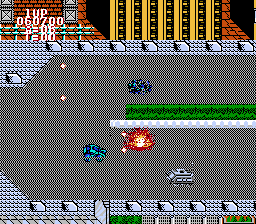 Watch Download (.fcm)
Author notes Discuss
5.08 / 10 Votes: 4
BreakThru is a short, fast-paced game developed by Data East. It was released to arcades in 1986 and later ported to a few home consoles. You are the driver of a blue dune buggy, and your mission is to recover a stolen fighter plane, which lies behind 5 enemy lines that you must "break thru".
Dave_dfwm strikes fear into the hearts of his enemies by tearing across the landscape and shooting everything in his path.
Published on 12/11/2012
See full publication history
Game:
BreakThru
Genres:
Action
Shooter