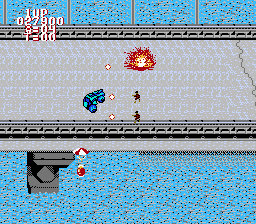 Watch Download (.fm2)
Author notes Discuss
4.65 / 10 Votes: 6
BreakThru is a short, fast-paced game developed by Data East. It was released to arcades in 1986 and later ported to a few home consoles. You are the driver of a blue dune buggy, and your mission is to recover a stolen fighter plane, which lies behind 5 enemy lines that you must "break thru".
MESHUGGAH improves the previous movie by roughly 1.5 seconds, thanks to better optimisation. He strikes even more fear into the hearts of his enemies than before by tearing across the landscape and shooting everything in his path.
Published on 2/17/2015
Obsoletes:
NES BreakThru by dave_dfwm in 06:37.13