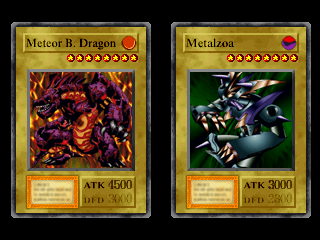 Watch Download (.pjm)
Author notes Discuss
6.33 / 10 Votes: 9
Yu-Gi-Oh! Forbidden Memories is a card based video game. The rules are one of the simplified prototypes made while developing the trading card game from the manga. The player controls Yugi, who pieces together the millenium puzzle, travels to ancient Egypt, and defeats evil.
In this run, Hoandjzj uses Fusion to overpower the enemies and luck manipulation to get better cards and avoid some of the most challenging cards of the oppenents. The chances for manipulation are limited and often take the form of attacking first with a weak monster before using a monster that could have one-hit-kill the opponent. The first battle can't be won, so it becomes a race to lose quickly.
Published on 2/3/2013 12:00 AM
See full publication history
Game:
Yu-Gi-Oh! Forbidden Memories
Genres:
Puzzle
Strategy

Emulator Version:
psxjinv2.0.2
Webmasters, please don't link directly to the files. Link to this page or the front page instead.
Republication of movies from this site is only allowed under the following conditions:
Do not label them with speculations. If unsure, ask the site staff for details.