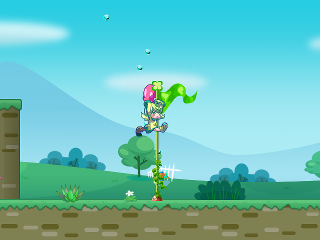 Watch Download (.wtf)
Author notes Discuss
7.53 / 10 Votes: 15
Eryi's Action is a sidescrolling platformer where Eryi must charge through a series of devious traps and enemies in order to stop Farta and recover her melon. There are so many of these traps, in fact, that the developers designated the game a "trapformer". In many cases, the most obvious path through an area does not work, and only clever thinking or trial-and-error will allow Eryi to proceed safely.
Aside from the traps, the game is designed to be very similar to Super Mario Bros.: enemies are defeated by being jumped upon, a flagpole must be reached at the end of each stage, and there are even mushrooms (which can be used as trampolines).
In this run, Bernka uses tool assistance to barely steer Eryi away from many traps and even fool several others, chaining mushroom and enemy jumps and moving precisely to beat the game in the fastest time possible.
For a movie of a similar but much less polished game, see the Syobon Action TAS.
Published on 11/21/2013 12:00 AM
See full publication history
Game:
Eryi's Action
Genres:
Action
Platformer
Puzzle