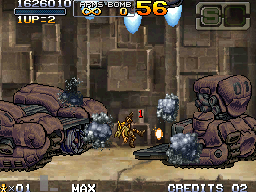 Watch Download (.dsm)
Author notes Discuss
8.53 / 10 Votes: 5
The classic Metal Slug series comes to the DS with Metal Slug 7. Although there is only one player this time, this version is notable for allowing the player to keep two weapons and switch freely between them.
This run by zk547 uses Eri through all 7 missions without dying. Eri is chosen because of her ability to aim grenades in 8 different directions and receive twice the number of grenades from the bomb/grenade item. The extra grenades become useful throughout the run and make her a lot faster than the other characters, especially in the final mission. Despite not dying at all, this run still manages to beat the previous run in this category by 00:10.11 seconds as well as the Marco run by almost two minutes.
Also check out the runs of other Metal Slug games such as Metal Slug, Metal Slug X, Metal Slug 3, Metal Slug 4, Metal Slug 5 and Metal Slug Advance.
Note: The second pair of downloadables and torrents are encodes of only the top screen.
Published on 6/9/2014
Obsoletes:
DS Metal Slug 7 "Marco" by mtvf1 in 23:10.70
DS Metal Slug 7 by mtvf1 in 21:27.77

Emulator Version:
Desmume 0.9.8
Webmasters, please don't link directly to the files. Link to this page or the front page instead.
Republication of movies from this site is only allowed under the following conditions:
Do not label them with speculations. If unsure, ask the site staff for details.